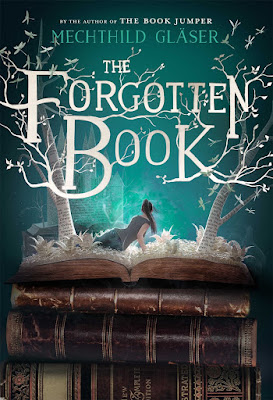 Book Jumper author Mechthild Gläser revisits a literary theme in this humorous fantasy novel. For the 200th anniversary of Jane Austen's death, she adapts figures and motifs from the books of the popular author, picking up on the most beautiful romance novels in literary history, not without conjuring up a fantastic story of her own with many surprises. When Emma finds an old notebook in the library of her boarding school, she thinks it's a kind of history of the school. But it's the other way around: Anything that you put into this book actually comes true.
Of course, Emma immediately starts by "correcting" the school routine at Schloss Stolzenburg a little bit. But nothing happens the way she thought it would. Especially since earlier chroniclers have used the book. For example, a young Englishwoman who wrote a fairy tale about a faun at the end of the 18th century and later became a successful writer. Or Gina, who disappeared four years ago, after she had entrusted her secrets to the chronicle.
As Gina's brother Darcy interferes, the chaos is perfect. Because Emma and Darcy are devoted to each other in heartfelt dislike - at least that's what the two think.

Mechthild Gläser's The Forgotten Book is a Jane Austen inspired novel about a 16-year old girl named Emma Morgenroth who finds a magical book with a strange figure on the cover. She discovers that anything she writes inside the chronicle comes true. Except sometimes the things she writes in the book actually have consequences for those around her. And, to make things even more twisted, someone else is interested in the chronicle, and may have been involved in the disappearance of a young girl named Gina de Winter 4 years ago.

Originally called Emma, der Faun, und das vergessenge Buch, The Forgotten Book should not be considered sequel to The Book Jumper. The protagonist and settings are no where near being the same nor is the plot or characters involved in the story.  Emma has spent the past 4 years at Stolzenburg Castle where her father is headmaster of the prestigious school for the one percenters in the world. Except for the fact that her mother lives in England with her boring boyfriend, and her father is a hypochondriac, Emma has it pretty easy compared to others.

But, with the arrival of Darcy de Winter and his friend Toby Bell, the discovery of the chronicle, and the unsolved disappearance of Darcy's sister Gina four years ago, trying to solve a long time mystery may have even more consequences than Emma or her friends Charlotte, & Hannah can imagine. The author focuses all her attention on the mystery of Gina's disappearance, the legends of Stolzenburg, including some journal entry's from the 18th century, and the love hate relationship that develops between Emma and Darcy.

I am going off script a bit when talking about Emma and Darcy and their unusual romance. I am going to say that I did not like the fact that Darcy is 20 years old, while Emma is 16. Perhaps it is a European thing, or perhaps it is the Jane Austen inspired thing, but the 4 year difference is a whole lot for me to overcome and accept. I also noticed a huge discrepancy in the timeline. One minute Emma is talking to an important secondary character who is involved in almost every aspect of this story, and the next moment 2 weeks have flown by without explanation.

Overall, I think the author had a fine idea behind writing a book that is a chronicle of events, and you can actually write things in it and change the course of events for yourself and others. Besides the clunky timeline fiasco, and the entire thing being wrapped up so quickly I had no clue what just happened or how, overall it's a fine book if you like a bit of Jane Austen inspired mystery.