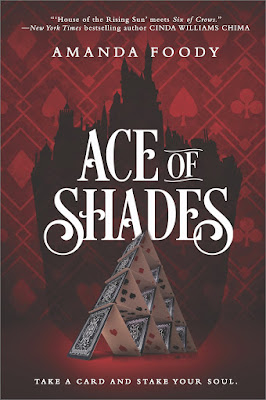 Welcome to the City of Sin, where casino families reign, gangs infest the streets…and secrets hide in every shadow.

Enne Salta was raised as a proper young lady, and no lady would willingly visit New Reynes, the so-called City of Sin. But when her mother goes missing, Enne must leave her finishing school—and her reputation—behind to follow her mother’s trail to the city where no one survives uncorrupted.

Frightened and alone, her only lead is a name: Levi Glaisyer. Unfortunately, Levi is not the gentleman she expected—he’s a street lord and con man. Levi is also only one payment away from cleaning up a rapidly unraveling investment scam, so he doesn't have time to investigate a woman leading a dangerous double life. Enne's offer of compensation, however, could be the solution to all his problems.

Their search for clues leads them through glamorous casinos, illicit cabarets and into the clutches of a ruthless Mafia donna. As Enne unearths an impossible secret about her past, Levi's enemies catch up to them, ensnaring him in a vicious execution game where the players always lose. To save him, Enne will need to surrender herself to the city…  And she’ll need to play.

Ace of Spades, by author Amanda Foody, is the first installment in the authors The Shadow Game series. Foody is also the author of Daughter of the Burning City. One could call this story a mash-up of House of the Rising Sun meets Six of Crows. Foody takes readers to the infamous City of Sin (New Reynes) with the story of Erienne "Enne" Salta, a 17-year old lady-to-be orphan who must brave rowdy casinos, magic, street gangs, Ponzi schemes gone wrong, and a mire of dangerous politics as she searches for her missing foster mother, Lourdes Alfero, using Lourdes rules of survival and a trusty hand book.

"Avaric, pride and lust; these are all modest desires. What the City of Sin truly craves is destruction" - The City of Sin, a Guidebook: Where to Go and Where No To.

Foody explores the classic themes of seeking the truth and finding where you belong, all set against a rich and evocative fantasy backdrop. Foody alternates her story through two very different characters; Enne Salta, who I mentioned before. Enne, from Bellamy, is armed only with a letter her foster mother left her after going missing 4 weeks ago telling her to find Levi Glaisyer, and 17-year old Levi Glaisyer, a gang leader, a card dealer & card shark, a lover of both men and women apparently, and someone who is just one scheme away from owning the streets and having everything he's ever wanted.

In New Reynes, Enne can't trust anyone. Not Levi, who leads her into the devil's own den where she finds herself bound to a crime leader and forced to work while searching for her foster mother. Not Vianca Augustine, head of the Augustine Crime family who has a fetish for all things Mizer, and certainly not Sedric Torren, the man who may have a connection to a group that has risen out of the Shadows and may possibly be the most dangerous person Enne will face in New Reynes. Enne must also explore her blood talent that derives from her parents. Parents she never knew.

This is a story that features some interesting ideas. Mizers, who apparently were overthrown 25 years ago, monarchists, Talents o Mysteries, and Talents of Aptitude, volts, which one uses as a payment method, and orbs. All kidding aside, this story is twisted, strange, bizarre, and really shouldn't be compared with Six of Crows. Levi surely has nothing on Kez Brekker, and neither does his so called crew. One could say that Levi's crew, minus Jac, is pretty much non-existent and not even in play for most of the story. The only other characters that really matter in the long run outside of Enne and Levi, are Lola Sanguick, and Zula Slyk. I enjoyed Enne's character development. From the green and innocent girl who arrives in New Reynes, to the girl who has a whole lot of encouraging growth in a positive direction.

"She’d faced the witch. She’d poisoned the wolf. She’d strolled into the land of death with her head held high and left it a lord. She was an impossible player in a fixed game, the only person not playing to win."