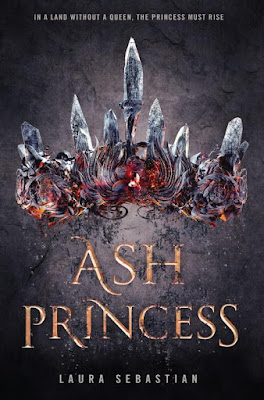 Theodosia was six when her country was invaded and her mother, the Fire Queen, was murdered before her eyes. On that day, the Kaiser took Theodosia’s family, her land, and her name. Theo was crowned Ash Princess—a title of shame to bear in her new life as a prisoner.

For ten years Theo has been a captive in her own palace. She’s endured the relentless abuse and ridicule of the Kaiser and his court. She is powerless, surviving in her new world only by burying the girl she was deep inside.

Then, one night, the Kaiser forces her to do the unthinkable. With blood on her hands and all hope of reclaiming her throne lost, she realizes that surviving is no longer enough. But she does have a weapon: her mind is sharper than any sword. And power isn’t always won on the battlefield.

For ten years, the Ash Princess has seen her land pillaged and her people enslaved. That all ends here.
Story Locale: fictional Kingdom of Astrea

"I will not anger the Kaiser and he will keep me alive." Theodosia


Ash Princess is the first installment in debut author Laura Sebastian's Ash Princess trilogy. 16-year old Theodosia Eirene Housara is the main protagonist for this series. When she was 6-years old, her country was invaded and conquered quickly by Kalovaxians. The Kalovaxians executed the Queen, who just happened to be Theo's mother, took away Theo's name and title, & renamed her Thora or the Ash Princess.

Thora is a clear reminder for her people that the Kaiser defeated them quickly, and he can do anything he chooses to continue to enslave them. Thora refuses to make any waves. She takes lashings every time one of her people, Astreans', rebels or fights back against the tyrannical rule of the Kaiser. She believes that if she angers the Kaiser, he will no longer have any use for her and kill her. Theo's body shows the signs of torture she has faced for the past 10 years.

How anyone is able to continue to live through such mental and emotional abuse is one of the reasons I choose to keep my review where it is. Theo must wear an Ash crown every time there is an important event she is forced to attend. Even though she is the rightful Queen of Astrea, Thora has pretty much given up hope that anyone will save her. That is until she is forced to kill one of the last people in the world she thought would be able to save her from her imprisonment, and the boy from her past who she had lost all hope of ever seeing again.

Theo's only friend is Crescentia. But, Cress's father isn't innocent of what happened to Theo or her Kingdom. While their relationship is the only thing that really gives Theo hopes of continuing to breathe, it's not something one should hang their hat on. Ash Princess has the most obviously love triangle you can find in any book. There is Theo's childhood friend and first love Blaise, and then there's Søren, the boy who will one day be Kaiser. There is no such thing as the perfect romance. It is what comes when the final page of the series is turned and the protagonist chooses who she wants to spend her HEA with.

This is a curious land. It is a land where Spiritgems used to be sacred things, before Astrea was conquered by the Kalovaxians who thought they could use them for power and magic. The gems came from the caves that ran beneath the four major temples— one for each of the four major gods and goddesses of fire, air, water, and earth. Before the siege, the devout would spend years in the cave of the god or goddess they swore allegiance to. Now, the Kalovaxians use the Spiritgems as fashion accessories and to show their status in this society while Theo's people slave away in deep caves.

We've all read this sort of story before (Red Queen, An Ember in the Ashes), and we'll read it again because the Young Adult Fantasy genre is red hot right now according to most publishers you talk to. It is a story about a girl who loved her Kingdom, her mother, her status, and her reason for living until it was abruptly taken away from her. Girl chooses to fight back for her Kingdom using the resources at hand. A prince who would be Kaiser, a former best friend who is still alive, and Astrean Guardians who know she is the true Queen of the land.

Oh yes, let's add this to ensure I cover all the bases:

Trigger/Content Warnings for racism, enslaving humans, abuse, torture, graphic beating, humiliation, captivation, gore, murder, death, loss of a loved one, bullying, talk of rape in the past, talk of animal murder in the past, sexual assault (unwanted touching), and rebellion/war themes.

“Thora!”I turn to see Crescentia barreling toward me down the gilded palace hallway, pink silk skirts lifted as she runs and a broad grin spread across her lovely face.Her two maids struggle to keep up with her, their emaciated frames drowning in homespun dresses.Don’t look at their faces, don’t look, I tell myself. Nothing good ever comes of looking, of seeing their dull eyes and hungry mouths. Nothing good ever comes of seeing how much they look like me, with their tawny skin and dark hair. It only makes the voice in my head grow louder. And when the voice grows loud enough to push past my lips, the Kaiser grows angry.I will not anger the Kaiser and he will keep me alive. This is the rule I’ve learned to follow.I focus on my friend. Cress makes everything easier. She wears her happiness like the sun’s rays, radiating it to warm those around her. She knows I need it more than most, so she doesn’t hesitate to fall into step next to me and link our arms tightly. She is free with her affection in a way only a few blessed people can be; she has never loved someone and lost them. Her effortless, childlike beauty will stay with her until she is an old woman, all dainty features and wide crystalline eyes that have seen no horrors. Pale blond hair hangs in a long braid pulled over her shoulder, studded with dozens of Spiritgems that wink in the sunlight pouring through the stained-glass windows.I can’t look at the gems either, but I feel them all the same: a gentle pull beneath my skin, drawing me toward them, offering me their power if I’ll only take it. But I won’t. I can’t. Spiritgems used to be sacred things, before Astrea was conquered by the Kalovaxians.The gems came from the caves that ran beneath the four major temples— one for each of the four major gods and goddesses of fire, air, water, and earth. The caves were the center of their powers, so drenched in magic that the gems inside them took on magic of their own. Before the siege, the devout would spend years in the cave of the god or goddess they swore allegiance to. There, they would worship their deity, and if they were worthy, they would be blessed, imbued with their god’s or goddess’s power. They then used their gifts to serve Astrea and its people as Guardians.Back then there weren’t many who weren’t chosen by the gods— a handful a year, maybe. Those few went mad and died shortly after. It was a risk only the truly devout took. Being a Guardian was a calling— an honor— yet everyone understood what was at stake. That was a lifetime ago. Before. After the siege, the Kaiser had the temples destroyed and sent tens of thousands of enslaved Astreans to the caves to mine the gems. Living so close to the power of the gods is no longer a choice people make, but one that is made for them. There is no calling or allegiance sworn, and because of that, most people who are sent to the mines quickly lose their minds and, shortly after, their lives.And all that so the wealthy can pay a fortune to cover themselves in gems without even uttering the names of the gods. It’s sacrilege to us, but not to the Kalovaxians. They don’t believe. And without the blessing of the gods—without the time spent deep in the earth—they can possess only a shadow of a true Guardian’s power, no matter how many gems they wear, which is plenty for most of them. The Water Gems in Cress’s braid could give a trained Guardian the power to craft an illusion strong enough to create a new face entirely, but for Cress they only lend her skin a glow, her lips and cheeks a pretty flush, her golden hair a shine.Beauty Gems, the Kalovaxians call them now.“My father sent me a book of poems from Lyre,” she tells me. Her voice grows tense, as it always does when she speaks of her father, the Theyn, with me. “We should take it up to the pavilion and translate it. Enjoy the sun while we still have it.”“But you don’t speak Lyrian,” I say, frowning. Cress has a knack for languages and literature, two things her father has never had the patience for. As the Kaiser’s best warrior and the head of his army, the Theyn understands battle and weaponry, strategy and bloodshed, not books and poetry, but he tries for her sake. Cress’s mother died when Cress was only a baby, so the Theyn is all she has left by way of family.“I’ve picked up a few phrases here and there,” she says, waving a hand dismissively. “But my father had the poet translate some so I can puzzle out the rest. You know how my father enjoys his puzzles.” She glances sideways at me to see my reaction, but I’m careful not to give one.I’m careful not to imagine Cress’s father pressing his dagger to a poor scrawny poet’s neck as he hunches over his work, or the way he held it to my mother’s so long ago. I don’t think of the fear in her eyes. Her hand in mine. Her voice, strong and clear even then. No, I don’t think of that. I’ll go mad if I do. “Well, we’ll solve them quickly, between the two of us,” I tell her with a smile, hoping she believes it. Not for the first time, I wonder what would happen if I didn’t suppress a shudder when she mentioned her father. If I didn’t smile and pretend he wasn’t the same man who killed my mother. I like to believe Cress and I have been friends long enough that she would understand, but that kind of trust is a luxury I don’t have.