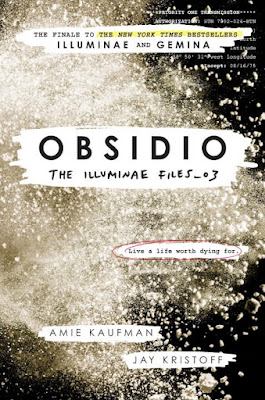 Kady, Ezra, Hanna, and Nik narrowly escaped with their lives from the attacks on Heimdall station and now find themselves crammed with 2,000 refugees on the container ship, Mao. With the jump station destroyed and their resources scarce, the only option is to return to Kerenza—but who knows what they’ll find seven months after the invasion?

Meanwhile, Kady’s cousin, Asha, survived the initial BeiTech assault and has joined Kerenza’s ragtag underground resistance. When Rhys—an old flame from Asha’s past—reappears on Kerenza, the two find themselves on opposite sides of the conflict. With time running out, a final battle will be waged on land and in space, heroes will fall, and hearts will be broken.Series Overview: Each book focuses on two new teens (a male/female) experiencing a different aspect of the same invasion.

"Live a life worth dying for."

Obsidio is the third and final installment in co-authors Amie Kaufman & Jay Kristoff's The Illuminae Files. Obsidio introduces two new characters—Asha Grant and Rhys Lindstrom—while bringing back characters from the previous books, Kady Grant, Ezra Mason, Hanna Donnelly, Niklas Malikov, Ella Malikova, and of course, AIDAN.  I will begin by summarizing where we are in this series. Obsidio begins on the planet of Kerenza IV where the series began with a major invasion by BeiTech. A planet that once had 18,000 people living there. Not anymore.

The planet is being occupied by BeiTech's who has decimated the population of Kerenza IV. Those who are still alive, are only alive because they are worthy of being alive. Here is where things get interesting. No spoilers deal? So, Asha Grant is Kady Grant's cousin who isn't supposed to be alive. But she is. She's a member of the planet's underground resistance who is trying to prevent BeiTech from gather enough Hermium to leave the planet and killing anyone left alive from getting word about the atrocities committed on the planet. (If you have read this series, you know that there is something happening in the background that ties into this very subject.) Asha and her resistance have done their best to take retaliatory action against those who have destroyed their planet, their friends and loves ones.

Rhys is on the wrong side of this war. He is part of the BeiTech's Mobile Jump Platform Magellan who ends up on the planet fixing things that need to be fixed. To make things even more twisted, Rhys just happens to know who Asha is. Again, no spoilers. Just the way of things that must be discussed. The relationship between Asha and Rhys is anything but sociable. In fact, it's cold as ice. If Asha could kill someone just by looking at them, Rhys would clearly be a short lived character. Rhys has to make a choice. He has to choose what side he is on. He has to choose to trust someone who in all likelihood hates his guts. He has to make a stand when the war comes knocking on his door knowing that if he goes against those he is serving with, it is likely they will all be dead soon.

On the other side of the galaxy, the crew and civilians onboard Hypathia, including Kady & Ezra, are exhausted, beaten down, grieving, and full of rage. To make matters worse, they are about ready to get a whole lot more uncomfortable with the arrival of the Betty Boop with Hannah, Nik and Ella onboard, as well as the Mao, with the Heimdall survivors aboard, which will become their new home seeing as there are way too many people for the Hyathia to hold. Kady, who has received a promotion from the ship's Captain, remains my favorite character through the three books in this series. She's brilliant, has saved thousands of people with her actions, and her curious relationship with AIDAN, keeps things interesting as well as twisted. Her relationship with Ezra is in a good place, but they know that they are not fully out of the frying pan just left. They know that it's only a matter of time before their enemy catches up with them.

Not to be left behind, Hannah is also a heroine in her own right after saving a whole lot of people from the Heimdall jump station. Hannah is also grieving having lost her own father, but that doesn't mean that she will forget everything she's been trained to do. Hannah is a fighter. She has inner strength and durability to do things others wouldn't or haven't thought about doing. One could also say the same for Asha when you get to the point of how she ended up surviving for this long. Unlike Kady and Ezra, Hannah still holds back with it comes to Nik. Not to say that their relationship is like Asha and Rhys, but it isn't one with a whole lot of romantic interludes.

I love my little spider girl Ella. She's got an attitude that she can easily back up with snark, sarcasm, humor, and being the best hacker among the survivors. Plus, I adored her relationship with Kady's father, Isaac Grant the only parent to have survived this long.
I'm not sure how to express my feelings about Aidan and what happens in this book. If I were to say anything without spoiling the book for you, I would say that he isn't without a huge amount of twisted idealism that leads to the most disturbing scenes in the book. I will say that he has one positive; he is fiercely protective of Kady, and perhaps he may even love her in his own way. Every story needs a monster. And the monster is most definitely Aidan.

The authors once again tell their story via Instant Messages, Briefing Notes, Officer Memorandums, Intercepted Personal Messages, Surveillance Footage, and the banter between Kady and AIDAN (Artificial Intelligence Defense Analysis Network). Marie Lu is back to do new journal illustrations, adding additional star power to a stand out novel. This is a series that walks the same path as 2001: A Space Odyssey, and other science fiction masterpieces. Probably why it has been so eagerly picked up by Brad Pitt's production company.