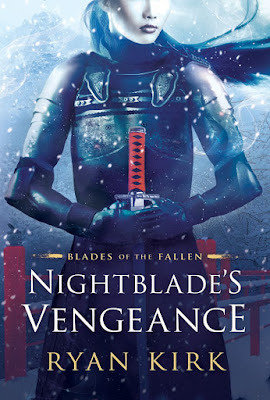 
In a thrilling fantasy series from the author of the Nightblade novels, revenge becomes a quest for a young female warrior.

In a feudal land, a Kingdom is at risk. With no heir to the fragile throne, its future rests with the powerful members of the dying king’s Council, including Minori, a nightblade warrior, and Kiyoshi, a dayblade healer. The two men are bound by the sword but divided by two opposing principles: rule the land, or serve it. In their challenge for supremacy, a spark has been lit.

Her name is Asa. Her creed is revenge.

A fierce nightblade warrior, she’s spent a decade in pursuit of the enigmatic general who killed her father in a violent revolt—then mysteriously vanished from all records. Now, her desire for reckoning has led her to the village of Two Falls—and straight into the heart of an impending civil war. Minori and Kiyoshi are vying for her loyalty. And Asa must choose sides.

As fresh betrayals unfold and a new uprising looms, Asa knows that chasing a ghost is no longer just a personal quest for retribution. It’s going to alter the fate of the entire Kingdom.

Nightblade's Vengeance is the first installment in author Ryan Kirk's Blades of the Fallen series. Ryan Kirk is also the author of the Nightblade trilogy which I have not read nor do I think it matters if you do or you don't. Set in a world that I am pretty sure is Japan during the Feudal Era, powerful Nightblades (who I am calling Samurai), and Lords (who I am calling Daimyo) play a dangerous game to see who will reign supreme and lead the Kingdom. The story is actually told through the eyes of three very distinct characters, but what happens in the beginning of the book, will stay with readers throughout.

If you ignore the beginning, you will miss the reason for the current state of the Kingdom and the Nightblades. Asa is a Nightblade who is on a mission of vengeance. She has lost her entire family, and now hunts the man who is responsible for killing her father 20 years ago in a place called Two Falls. As a Nightblade, Asa feels what others can't see. We won't call it the force folks. The author calls it Sense. Nightblades tend to be able to sense events at a distance, or they can predict an opponent's next movement, or they can walk into a village without being seen. Blades are almost mystic in their status. Nightblades are supposed to keep the peace, but history has a tendency of repeating itself over and over again because humans never learn from their mistakes and the Kingdom is on the cusp of war.

As for Asa, one could tell her when searching for vengeance, she should dig two graves, but I don't think that would have mattered one bit. Asa is so driven for revenge, that she gets careless at times, and really isn't all that hot when it comes to fighting against much quicker and skilled fighters. Thanks to a directive by the Council of Blades, Asa has unlimited access to records, and has been given the approval to kill the man who was responsible for betraying her father 20 years ago. When Asa finally meets the man who killed her father, will she have the strength to finish the job? And if she does, what's next for her?

But, this isn't only Asa's story as much as I would have preferred it to be. There are two other characters that matter just as much. Minori is a Nightblade who knows that the Blades are being targeted by the Lords. His mission is to regain the power that has been taken from the Nightblades even if that means working with the devil himself. Through some interesting twists and manuevors, Minori finds himself vying to deceive and control those who may become the next King of the Kingdom. Minori is thought to be a brilliant strategist and specialist, but even he finds that he may be in over his head.

The last character to mention is Kiyoshi. Kiyoshi is a Dayblade, which means that he can heal, but he is a whole lot more to him. He wants to ensure that the Nightblades continue to serve the Kingdom, and not go their own way like they tried to do 20 years ago. He happens to be the only person capable of keeping King Masaki alive which also makes him a target of opportunity for the Lords scrambling to take over.

But, there is so much more than meets the eye test. I especially liked his colleague Daisuke who is probably the most interesting Nightblade outside of another Nightblade named Koji. (I won't speak on Koji in this book since he is more of less a tertiary character. You'll see lots more of him in the sequel.) I was happily entrenched in this book because I love the Feudal history of Japan, as well as the Samurai.

There are so many correlations between this book and that era, that you can close your eyes and imagine that you are right there in the muck and the blood and the battles and the power plays. I liked the fact that the Nightblades are no longer considered to be immortal. I know that part of the blame for this lies in politics, and part lies in blackmail, murder, and vindictive Nightblades who take and take till there's nothing left. I dare say that I am hoping for more of Asa and Daisuke. I think there is a whole lot that he can teach her, including patience, and choosing where her path will lead her. While there is a fair amount of mystery and intrigue, I would have like to have the author use Asa's beauty as a crutch. Plus, she is the only Nightblade that a lead character position.