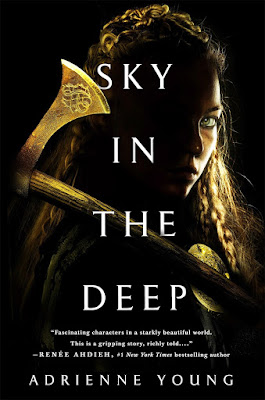 In this stunning debut, a young Viking warrior must challenge everything she's been taught in order to survive and protect those she loves.

A lush and vivid debut that is part Wonderwoman part Vikings and all action and heart.

Raised to be a warrior, seventeen-year-old Eelyn fights alongside her Aska clansmen in an ancient, god-decreed rivalry against the Riki clan. Her life is brutal but simple: train to fight and fight to survive. Until the day she sees the impossible on the battlefield—her brother, fighting with the enemy—the brother she watched die five years ago.

Eelyn loses her focus and is captured. Now, she must survive the winter in the mountains with the Riki, in a village where every neighbor is an enemy, every battle scar possibly one she delivered. But when the Riki village is raided by a ruthless clan settling in the valley, Eelyn is even more desperate to get back to her beloved family.

She is given no choice but to trust Fiske, her brother’s friend who tried to kill her the day she was captured. They must do the impossible: unite the clans to fight together, or risk being slaughtered one by one. Driven by a love for her clan and her growing love for Fiske, Eelyn must confront her own definition of loyalty and find a way to forgive her brother while daring to put her faith in the people she’s spent her life hating.

Sky in the Deep is the debut novel by author Adrienne Young. The story is steep in old Scandinavian & Viking tropes. There is plenty of violence, clan warfare, and one girl's curiosity that leads her to discovering that someone she thought was long dead, is actually alive and living with the hated Iri clan. 17-year old Eelyn is a member of the Aska Clan. She fights with a sword and an ax alongside her best friend Myra. Her clan has been fighting against the hated Riki Clan every 5 years for as long as she can remember. The clans honor two separate deities; Sigr and Thora.

Aska worships Sigr, who represents the water and the sea, while the Riki worships Thora, who represents mountains and fire. 5 years ago, Eelyn lost her brother Iri and has struggled to pick up the pieces and become one of the best warriors of her clan. As the story opens, we witness the fighting between the two clans. A fight that sees Eelyn abandon her clan and run after what appears to be a ghost of her brother. It ends with Eelyn being kidnapped by the Riki and taken to their village where she becomes a slave to her captor, Fiske. Facing a winter alone without any support, Eelyn has to find her inner courage in order to survive and attempt to escape back to her father and clan.

And this is where the story loses me. Not fully since there is an entire new battle to come against an even more dangerous enemy called Herja. But, let's be realistic. Eelyn's time among the Riki is painful to read. They hate her, she hates them, she hates her brother for being a traitor, she hates Fiske for nearly killing her & taking her away from her father and best friend. Eventually Eelyn suffers from the Stockholm Syndrome where she comes to realize the Riki aren't so bad after all (even though they still hate her) and starts to fall for Fiske. She discovers that her brother is actually really happy and not only bound to Fiske and his family, but in love with a Riki healer. Sounds like a soap opera, right?

It was hard for me not to sift through the pages quickly trying to get to the point where the action was. I wanted to like Eelyn as a heroine I can like, but she and the author make is so hard at times. There's more conversational scenes than action. Then, out of the blue, the hated enemy decides to attack the Riki and Aska clans simultaneously. So, now it comes down to Eelyn and Fiske not only uniting the clans, but putting full trust in each other not to stab the other in the back.

The most curious character in this book just happens to be a child named Halvard who befriends Eelyn and perhaps chisels the ice off her heart. Perhaps there is a message in the book about intolerance, hate, and prejudices even though the clans are in fact, similar. My one disappointment was the relationship between Eelyn and Myra. Myra isn't one to let things go quickly. She isn't one who changes her mind about hating someone just because an even darker enemy is at her doorstep. Shame.