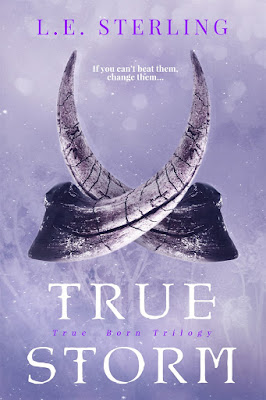 The highly anticipated conclusion to a high-concept sci-fi series perfect for fans of Moira Young, Alexandra Bracken, or Marie Lu.

If you can’t beat them, change them.

Lucy’s twin sister, Margot, may be safely back with her—but all is not well in Plague-ravaged Dominion City. The Watchers have come out of hiding, spreading chaos and death throughout the city, and suddenly Lucy finds herself under pressure to choose her future: does it lie with her handsome new friend Alastair; her guardian, the enigmatic True Born leader Nolan Storm; or the man who makes her heart trip, her savage True Born bodyguard Jared Price? But while Lucy ponders her path, fate has other plans. Betrayal is a cruel lesson, and the Fox sisters can hardly believe who is behind the plot against them. To survive this deadly game of politics, Lucy is forced to agree to a marriage of convenience. But is the DNA of her will stronger than the forces opposing her? Can she turn the tide against the oncoming storm?

As they say in Dominion, can rogue genes ever have a happy ending?

True Storm is the third and final installment in author L.E. Sterling's True Born Trilogy. As a summary of how we got here, a plague descended upon the world killing off a good portion of the population. Those that are left are divided into three groups, the Lasters, the Splicers and the True Born. Lasters are those who are beyond saving and on the last of their life, Splicers are those rich enough to keep up with procedures to prolong their life, and the True Born are a bit of genetic mutation that are immune to the plague and carry properties of certain animals that have adapted to survive this world.

The story once again returns to the city of Dominion where things are not as clear as one might believe. After returning with her twin sister Margot, Lucy Fox has once again been put in the forefront by her guardian Nolan Storm. She must attend parties, and gather information from the Upper Circle which may help Storm who is trying to gain more power over Dominion. He also must deal with a major uprising with the Lasters, and a powerful segment of the population that isn't done playing all their cards just yet.

Margot and Lucy are stuck in the middle of almost everything that happens in this book, and this series. You know that Margot and Lucy were born conjoined twins and we've discovered that after they were separated, their separation scars resemble a lock and key. This is one of those cases where I actually would have preferred that the author alternative narratives between the sisters. I don't think we get a clear view of what is happening to Margot, and why she seems so forlorn and not as perky as she once was.

If you've read the first two books, you know that there are some really important questions you need to ask yourselves. What makes the twins so special? Why does everyone, and I mean everyone, want to get their hands on the twins? Why do people think that Margot and Lucy may be the saviors of the world who can cure the plague? And, the most important question, who is the person that is behind what the twins have experienced since the failed revelation party and everything since?

::sigh:: Do I have to speak of the love triangle? So, Lucy is enamored with True Born Jared Price who, when they are together, they can't keep their hands off each other. Lucy's relationship with Jared was the most frustrating part of this entire trilogy. Their banter back and forth sometimes drove me crazy to the point of pulling my hair out. There were
plenty of issues that plagued this relationship. Both are easily the most self-absorbed couple. Neither will give an inch in order to actually admit that they have feelings for the other. Alastair returns with some interesting news and a curious revelation. He is also a factor in the Lucy sweepstakes which didn't make much sense considering nobody really knows all that much about Ali.

Then, of course, there is Nolan Storm who admits that his interest in Lucy is purely political capital. Is there romance there? Nope. After all the twists, after all the questions that are answered about Margot and Lucy, after a righteous battle in the streets of Dominion, the author really twists the ending in a curious manner that I actually loved. I don't believe the book needed to go any further than where it ended. I am happy with the overall choices that Lucy makes in the end. Throughout the entire series she's had to battle for everything. Nothing comes easily for her and I completely admire her development that leads to a courageous choice.