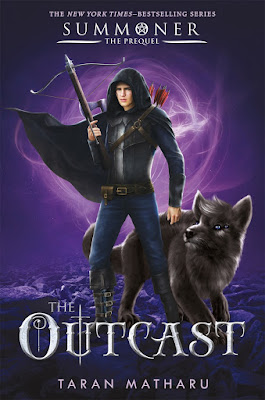 The fourth book in the New York Times–bestselling Summoner YA series is the prequel story of Arcturus and how he rose from boy summoner to head of Vocans Academy.


When stable boy Arcturus accidentally summons a demon and becomes Hominum's first common summoner, he becomes the key to a secret that the powerful overlords would do anything to keep hidden.

Whisked away to Vocans Academy so he can be kept watch over, Arcturus finds himself surrounded by enemies. But he has little time to settle in before his life is turned upside down once again, for Hominum Empire is in turmoil.

Rebellious intent simmers among the masses, and it will not be long before it boils over. Arcturus must choose a side . . . or watch an Empire crumble.

The Outcast, by author Taran Matharu, is the fourth installment in The Summoner series. Unlike the first three installments in the series, The Outcast takes a step back in time where readers will meet 15-year old Arcturus, a key player in the first trilogy. Like the first three books, this story once again takes place in a land called the Hominum Empire where first born nobles are sent to Vocan's Academy to learn the art of summoning demons.

One could say that Vocan's is a military school since those who graduate, go on to hopefully become battlemages which are used in the war against the Orcs. Arcturus is an orphan & stable boy who finds himself summoning a demon. A commoner being able to summon a demon is unheard of since the gift is normally passed on through blood. Arcturus demon is called Sacharisa, or Sacha for short. I adore the relationship between Arcturus and Sacha. Honestly, it's the best part of the entire story.

Since Arcturus apparently has an ability that is a top priority to King Alfric, he is rushed off to Vocans Academy where part, but not all of the story takes place. If you have read the first three books, you will love seeing younger versions of the adults who were Fletchers parents, teachers, battlemages, as well as Celestial Corps. As a commoner, Arcturus doesn't find a whole lot of friends except for Lieutenant Elizabeth Cavendish. In fact, there are those who are downright hostile towards him.

But, when you throw kids into extraordinary circumstances, like a rebellion and facing life or death situations, alliances can be formed by even the coldest of them all. Even though I already knew the fates of many of the characters who we meet in this book, it is still worthwhile to take a step back in time and see how things were when they were kids, and just getting started, including King Harold and Uhtred Thorsager, a dwarf blacksmith who played key roles in the final installment of the first trilogy.

I also loved Sacha and her relationship with another character, Elaine who is the youngest girl in the school. Elaine doesn't get a whole lot of credit, but she does her best to help out when things are looking grim. For the record, I am not unhappy at how the ending resolved itself. I think it is a perfect set up for the first three books in this series. I do believe that you can read this book first, and then jump into the trilogy since there's no real issue with missing things that have already happened. This is an entirely different cast of characters who the author focuses on while leaving the future Fletcher and crew to make their own way.