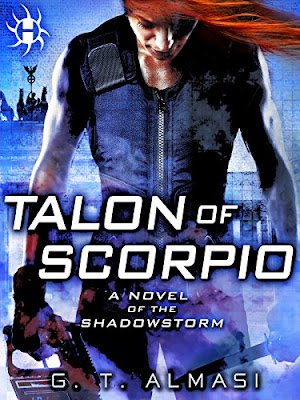 Superagent Alix Nico returns in a new Shadowstorm thriller from the author of Blades of Winter, which was hailed as “a hell-bent-for-leather mash-up of spy novel and science fiction” by Jason Bourne novelist Eric Van Lustbader. Alix Nico, code-named Scarlet, is a one-woman demolition derby. As a top American Level, she’s a cybernetically and biologically enhanced operative fighting a Cold War among the forces of freedom, a Soviet Union that never fell, a China hungry for power, and a Germany that emerged from World War II more powerful than ever. There’s a mole within ExOps, the covert agency responsible for the security of the United States, who has been working to decapitate the organization’s leadership. And when treason strikes, Scarlet and her partner, Darwin, find themselves matched against a rogue Level known as Talon, a merciless killing machine whose augmentations place her in a league of her own. But behind Talon lurks the real enemy, a traitor whose thirst for control threatens to upset the fragile balance of mutually assured destruction that has kept the four Great Powers from breaking into open warfare—until now.

Talon of Scorpio is the third installment in author G.T. Almasi's Shadowstorm series. The year is 1981. It is a world where in 1943, Germany came out of World War II as the victor. Now, an entire continent is under German control and calling itself Greater Germany. GG extends from England to the Middle East to Africa. Meanwhile, the US controls the Pacific and Japan, while the Nationalist Republic of China is allied with the USSR aka Russia. Rather than risk another all-out war, the four superpowers have poured their resources into creating superspies known as Levels.

These Levels are called Infiltrator, Protector, Interceptor, Vindicator, Malefactor & Liberator. The protagonist of the series is Alixandra Nico code named Scarlet. She is a level-10 Interceptor who works for an organization called Extreme Operations Division (ExOps for short). She has Modes and Enhances that able her to take on jobs that lead to plenty of ass-kicking, pain and destruction, and some off cut humorous situations with her partner Patrick aka Darwin. Scarlet's mission in this book is to capture Jakob Fredericks who is a traitor and creator of clones and bring him back to the US.

One of his creations, Talon, is just as badass and dangerous as Scarlet is. In fact, the first chapter in this book is packed with plenty of explosive action that leads Scarlet and Patrick across Greater Germany hunting Jakob and continuing their mission of keeping Greater Germany from allying with the USSR and China. Armed with her trusty Lion Ballistics LB-505 (Li’l Bertha), Scarlet is able to rise to the occasion time and time again. There are a bunch of new characters in this book, as well as others who have been introduced before. The author literally uses place that are historically important such as Dachau, Munich,

Alix began her covert ops training when she was only 12, and has never really been allowed to have any semblance of a normal childhood. She was also a world class gymnast. The psychological aspects of the past have really caught up to Alix in major ways. As a person who suffers from PTSD, I am glad that Almasi doesn't cover up Alix's issues including panic attacks, hallucinations, nightmares, and hysterical blindness. Also, for those who haven't read the first two installments, it was a very trying 8 years with not knowing what happened to her father. Now that he's back, things are slowly coming around to what is claimed to be normal in this world.

The author writes in a brash style of comic book superheroes to create a kick-ass alternate history that reimagines the Cold War as a clash of spies with biological, chemical, and technological enhancements. Though its roots lie in speculative fiction and alternate history, the novel reads like a mainstream spy thriller, full of thrills and action, giving it a true crossover appeal. The heroine’s brash, bold voice instantly draws the reader into the world, and the non-stop action keeps you flipping pages compulsively. The thoroughly researched and well-thought-out world behind the book not only gives it a stunning verisimilitude, but also offers infinite storytelling possibilities within the wider universe.

The author has gathered together a who's who of real life characters straight out of history. John F. Kennedy who was assassinated as President, but in this book, he is Ambassador to Ireland thanks to some Bill Clinton like shenanigans. Robert (Bobby) Kennedy who was a NY Senator until he was assassinated, is the new Director of ExOps. The author actually does really well with getting Bobby's inflection down pat. You will also find George H.W. Bush, who served his country in World War II, in the CIA and as President, as well as William Webster, former FBI and CIA director. Then you have Anne Frank who is named Garbo in this series.

I do have one tiny caveat. The first book, Blades of Winter, released in 2012. The second book, Hammer of Angels, was released in 2014. It has been 4 years between the second book and this one. I leave you with this; there is a definite cliffhanger ending that absolutely changes the course of where the author must go from her. My only hope is that he doesn't wait another 2-4 years to write a fourth book. 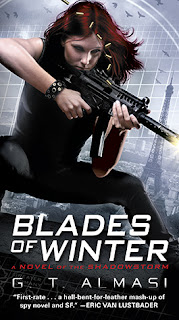 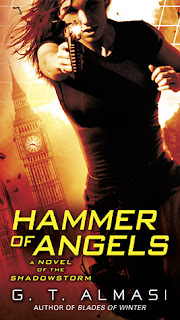