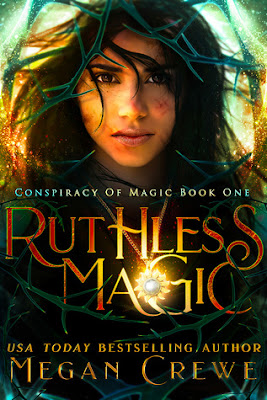 In the contest to keep their magic, the only options may be die... or kill.Each year, the North American Confederation of Mages assesses every sixteen-year-old novice. Some will be chosen. The rest must undergo a procedure to destroy their magical ability unless they prove themselves in the mysterious and brutal Mages' Exam.Disadvantaged by her parents' low standing, Rocío Lopez has dedicated herself to expanding her considerable talent to earn a place in the Confederation. Their rejection leaves her reeling—and determined to fight to keep her magic.Long ashamed of his mediocre abilities, Finn Lockwood knows the Confederation accepted him only because of his prominent family. Declaring for the Exam instead means a chance to confirm his true worth.Thrown into the testing with little preparation, Rocío and Finn find themselves becoming unlikely allies—and possibly more. But the Exam holds secrets more horrifying than either could have imagined. What are the examiners really testing them for? And as the trials become increasingly vicious, how much are they willing to sacrifice to win?The first in a new series by USA Today bestselling author Megan Crewe, Ruthless Magiccombines the magic of Harry Potter with the ferocity of The Hunger Games alongside a poignant romance. Fans of Cassandra Clare and Holly Black, look no further for your next urban fantasy fix.

Ruthless Magic is the first installment in author Megan Crewe's Conspiracy of Magic series. The story is actually told in two separate narratives; 16-year old Finn Lockwood, son of the man, Jonathan Lockwood, who helped bring Mage's into the light of day. The second narrative is by 16-year old Rocio Lopez who is a much, much better magician than Finn but doesn't have the same options open to her. While Finn is from a long lineage of mages, Rocio's parents have been Dampered, or, had their magic contained so it's at the barest minimum.

Let me say that I recommend readers pick up Magic Unmasked before you read this story. Magic Unmasked actually takes place 40 years before this story, however, there are several key players in the story, including Jonathan Lockwood, and Raymond Lockwood, who appear in both installments. Magic Unmasked focuses on Jonathan and another character who I won't spoil since there's no point. It was because of Jonathan's action in Unmasked, that have led to the world these characters live in now.

This is a world where old magic, mixes with new magic, mixes with those like Rocio who are extremely talented but are often left out of the elite schools where magic is taught at a higher level. In this world, when you turn 16, you are either chosen for the College of North America Confederation of Mages, or you are Dampered. There is, however, another choice and that is to opt into a brutal contest called the Mage's Exam where only the top survivors are chosen for the College, or other opportunities.

Both Finn, who doesn't believe his family takes him seriously, and Rocio, who spent years at a much less prestigious school in Manhattan, opt into the Mage's Exam along with 54 other candidates from all over the country. Since Finn's best friend Prisha Mathurs is an important secondary character, I will mention that she chooses the Mage's Exam as well. Prisha is what the author calls new money. To become a Champion, Finn, Rocio, & Prisha will have to survive 5 days of testing. 5 days of the most brutal, the most diabolical, the most nerve shattering testing you've read about since, well, The Testing by Joelle Charbonneau.

As a reviewer, we are supposed to tell you who our favorite characters are and why, right? Well, I have to say that I give Rocio the edge since she is utterly impressive, powerful, and really good at magic. Without her magic, she would be just another person on the streets with no future and no expectations. Rocio is also searching for answers to what happened to her brother Javi who disappeared 3 years ago, and has been presumed dead.

Finn is second since he is someone who is trying to prove himself and not be taken for granted because of his name. He isn't at the top of any mage list. He's not even in the middle. He's probably at the bottom which gives certain family members pause to question what they are going to do with him. What makes Finn a really good hero, is that he wants to actually use his magic for good, not unlike his own father in Magic Unmasked. Finn doesn't like that the Confederation has so much power to decide a person's fate, especially when there are those like Rocio and Prisha who are just as talented as those from old money magic families.

I am definitely eager to read the sequel whenever it is planned for release. There are a whole lot of avenues the author has left for herself to explore from both Finn and Rocio's perspectives after the final bell is tallied, and those who survived are named Chaptions, or end up Dampened.