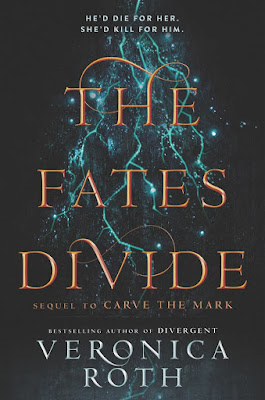 
In the second book of the Carve the Mark duology, globally bestselling Divergent author Veronica Roth reveals how Cyra and Akos fulfill their fates. The Fates Divide is a richly imagined tale of hope and resilience told in four stunning perspectives.

Fate brought them together. Now it will divide them.

The lives of Cyra Noavek and Akos Kereseth are ruled by their fates, spoken by the oracles at their births. The fates, once determined, are inescapable.

Akos is in love with Cyra, in spite of his fate: He will die in service to Cyra’s family. And when Cyra’s father, Lazmet Noavek—a soulless tyrant, thought to be dead—reclaims the Shotet throne, Akos believes his end is closer than ever.

As Lazmet ignites a barbaric war, Cyra and Akos are desperate to stop him at any cost. For Cyra, that could mean taking the life of the man who may—or may not—be her father. For Akos, it could mean giving his own. In a stunning twist, the two will discover how fate defines their lives in ways most unexpected.

The Fates Divide is the second and final installment in author Veronica Roth's Carve the Mark duology. In addition to Cyra Noavek and Akos Kereseth's point of views, the author has added in two new alternating perspectives: Eijeh Kereseth and Cisi Kereseth. Each have their own unique powers—and their own agendas and are probably the two least likeable characters in this entire series. Both Cyra and Cisi's are in the first person, while Akos is in the third person.

As the story opens, Cyra, Akos, Cisi, Eijeh, Isae Benesit, and oracle Sifa Kereseth have escaped onboard a Shotet exile ship and are heading for an exile colony on Ogra. But, before they arrive, someone will die, and two of the characters, Cisi and Isae are jettisoned to find their own way to the Assembly ship. Then the news arrives, the former tyrant leader of the Shotet, Lazmet Noavek, presumed dead for 10 seasons, is very much alive and ready for war against the Assembly and the Thuvhe.

I always get to this point, and wonder what I shall write in order to avoid spoilers. Even though the book has been out since April, there are still those who have not read the story, or even the series for that matter. I did a bit of head scratching when the author did a major twist between Cyra and Akos. I was actually okay with the twist because it actually made the story even more interesting. While Akos and Cyra were doing their thing in saving the universe and getting over their angst and feelings for each other, I did not like Cisi one tiny bit.

She is a manipulative witch, and if she was a man, the relationship between her and Isae would be called abusive. My other minor complaint, well, not so minor, is why the author chose to write in first person for Cyra, & Cisi, while writing Akos in the third person. Overall, I think The Fates Divide is actually a set up from Carve the Mark. When you compare the so called villain to Isae, you have to really ask yourselves who did the most damage and who caused the most problems when all is said and done.

Where the first book was mainly captured in one place, The Fates Divide spans across different planets and the Assembly ship where Cisi and Isae end up. Oh yes, as I read my notes to remind myself why my rating is what it is. Let's briefly talk about Eijeh. Here is a character who is given 3 chapters at the most. Here is a character who has been through so much since he was first taken along with Akos. Here's a character who has a whole lot of potential, but is only used sparingly. What was the point I asked myself? ::looks at the author::