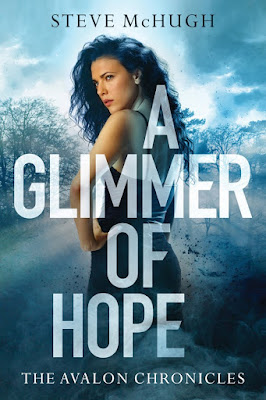 From Steve McHugh, the bestselling author of The Hellequin Chronicles, comes a new urban fantasy series packed with mystery, action, and, above all, magic.Layla Cassidy has always wanted a normal life, and the chance to put her father’s brutal legacy behind her. And in her final year of university she’s finally found it. Or so she thinks.But when Layla accidentally activates an ancient scroll, she is bestowed with an incredible, inhuman power. She plunges into a dangerous new world, full of mythical creatures and menace—all while a group of fanatics will stop at nothing to turn her abilities to their cause.To protect those she loves most, Layla must take control of her new powers…before they destroy her. All is not yet lost—there is a light shining, but Layla must survive long enough to see it.

A Glimmer of Hope is the first installment in author Steve McHugh's The Avalon Chronicles. Layla Cassidy is the protagonist of this series. She's a student of metallurgy, she absolutely blames her father for ruining her life spectacularly (even after he trained her in all forms of personal protection), and she has some curious friends, especially Chloe Ranje. She's also has a voice in her head telling her to commit acts of violence. Thankfully, she has never once listened to the voice.

Not after her mother was killed in a bizarre car accident, and now after her father was arrested and imprisoned when she was 14 for killing over 300 people in the States. Layla's life that she has tried so hard to hide away from the public eye is about ready to be upturned thanks to forces who want her to help in finding her father. It all starts innocently enough. At work, she finds a group of powerful beings who slay her co-workers and take her hostage after she tries to run away.

According to the villain, Elias Wells, Layla is one of only 3 people in the entire world who know the location of her father's secret prison. Wells as a villain is the real deal folks. He's dark, well written, well rounded, evil incarnate, & has an agenda that leaves him not giving two figs who he offends or who he has to kill to be successful in his goal of finding Layla's father. While attempting to escape, she accidentally becomes a vessel for spirits, which includes having inhuman powers.

In order to survive, Layla must accept all four spirits, and learn how to keep her emotions under control while continually being a target of Wells, and his master Nergal who wants to take down the organization known as Avalon, and replace it with like minded folks who are willing to take over the world. While Layla is learning about her new abilities, and her new state of being, as it were, she also has to face the facts that she never can go back to being normal again. She is now part of something much larger than herself.

Before you ask, yes, I really liked Layla. In fact, I really loved her character growth over the course of the story including her interactions with the 4 spirits, especially Rosa, that she accidentally ends up with. She, unlike most of the other characters in this book, had no clue that there are more beings in this world that she could ever believe. Until she becomes an Umbra and is now one of them thanks to the spirits she no carries with her. She must ally herself with those like Thomas Carpenter, Olivia Green, Diana, Chloe, Remy, her best friend Harry Gao, and Kasey.

Some readers have indicated to me that this book is a spin-off of the authors Hellequin Chronicles. I couldn't tell you since I've never read anything by this author until now. I can say that there are characters who do appear in both series. This includes Nate Garrett, a sorcerer who formerly worked for a group called Avalon, but is now apparently doing things independently from the group, Tommy, Diana, Remy, and Dr. Grayson. This is a story filled with a whole range of legendary & mythological characters as well as magic, spirits and demons. I can't wait to meet the mysterious Nergal. Could he be the mysterious My Liege from the 7th installment of the Hellequin Chronicles? Good thing the publisher has already sent me the sequel to this book!