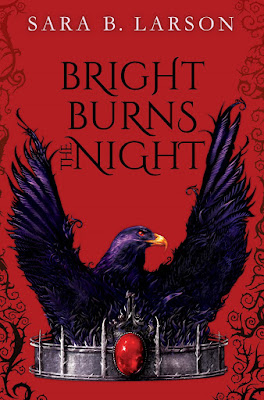 Ten years ago, King Lorcan of the Dark Kingdom Dorjhalon defeated Queen Evelayn and cut her conduit stone from her. Since then, he has kept her trapped in her swan form. With the loss of balance between Dark and Light, winter has descended and the Draíolon of Éadrolan lose more power every day. But once a year, Lorcan transforms her back to her Draíolon form and offers a truce.

And every year Evelayn refuses -- for he requires her to Bind herself to him for life. But now, with an Ancient power bearing down upon them, everything may change. Evelayn will learn that the truths she once believed have shattered, and that she may need her enemies even more than her allies. Lorcan and Evelayn become partners in a desperate quest to return the balance of power to Lachalonia. How far will this partnership go? Can friendship -- perhaps even love -- bloom where hatred has taken root?Sara B. Larson delivers a thrillingly romantic and hauntingly satisfying end to this extraordinary duology.

Bright Burns the Night is the second and final installment in author Sara B. Larson's Dark Breaks the Dawn duology. The Dark Breaks the Dawn duology is a reimagining of Swan Lake. Ten years ago, King Lorcan of the Dark Kingdom Dorjhalon defeated Queen Evelayn of the Light Kingdom of Éadrolan and cut her conduit stone from her. He also used his powers to transform her into a swan. Get it? Swan Lake? Since then, he has kept her trapped in her swan form where nobody can find her. Can't spoil things that have already been spoiled by the synopsis, right?

Once a year Lorcan transforms Evelayn back to her Draíolon form and offers a truce; all she has to do is bind herself to him for life. Every year Evelayn refuses only to be returned to swan form and hidden away from those who are lost without her. After all, why should she bind herself to the man who she offered peace to and got only heartbreak and betrayal? But now something has apparently changed. This time, Evelayn finds herself free for the first time in a decade. With the loss of balance between Dark and Light, winter has descended on Draíolon and the Éadrolan lose more power every day.

To make things every more twisted, an Ancient power, who readers met in the first installment, is bearing down upon them, and everything may change. Evelayn will learn truths she once believed in to be facts have been shattered, and that she may need her enemies even more than her allies. Except for Ceren and Quinlan who have never lost hope in finding Evelayn and freeing her. Lorcan and Evelayn become partners in a desperate quest to return the balance of power to Lachalonia. How far will this partnership go?

So, let me get to my rating argument. If you've read the first installment, and hopefully you have, or will before jumping into this book, there was a whole lot of action, and suspense, and betrayal, and twists in the final chapter of the previous story. So bad were the betrayals, that the author seems to have forgotten what she wrote and decided to toss it all out the window and make believe that nothing of what happened between Evelayn and another character was anything that meant anything because she was going to turn an enemy into a possible love connection.

See, I can be mysterious. In this book, the author makes the villain, (and yes he still is the villain for anyone who cares to debate me), supposedly a hero and the only person that Evelayn can rely on to protect her people, and bring the peace that she and her parents had tried before they died. You will also notice that this book takes place over the course of a 3-4 day period. It is not necessarily rushed, but there is a whole lot of action and adventure and revelations in that short time frame.

I am not a fan of the romance in this book and that too affected by overall rating. I just don't see tearing a former coupling a part and then fermenting mistrust and anger in order to proceed in a entirely different direction. Ok, that was probably too much to tell. The current coupling is absurd and laughable and so damn predictable that I couldn't help roll my eyes. My last comment. When last we saw Evelayn, she was 18 years old. After ten years, she would be 28, right? So, why did the author make her characters should as though they were still in their teens?