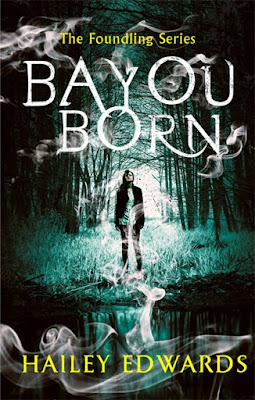 Her beginning may be our end...

Deep in the humid swamps of the Mississippi bayou, a mysterious, half-wild child is dragged just in time from the murky waters. She has no memories, no family and is covered in strange markings, the meaning of which no one is able to decipher. Adopted by the policeman who rescued her, Luce Boudrou follows him into the force, determined to prove herself in the eyes of those who are still suspicious.

However, there's more of a battle ahead than Luce could possibly imagine. She may be an orphan without a past, but no one - including Luce herself - could ever be prepared for the truth of her dark, powerful destiny...

Bayou Born is the first installment in author Hailey Edwards Founding series. 25-year old Luce Boudreau is protagonist of this series. Luce is a 25 year old woman with a 15 year old identity. Weird right? Not so weird when you start to understand that Luce was discovered in the swamps of Mississippi by a police officer named Edward Boudreau who ended up adopting the "wild child" as his daughter. The same wild child who choose to become a police officer for Canton, Mississippi PD and has been in the spotlight ever since.

Lucy has curious concentric mental circles made up of an unclassified alloy on her body which can't be removed. Trust me, it's been tried and that's led Luce to hate being in any hospital for any amount of time. On her "found day," she receives mysterious calls through a phone that shouldn't work from an entity called Ezra. Nope, I have no clue who Ezra is, and that is the beauty of having this particular character in the background. It is apparent that Lucy and Ezra have some connection, but the author is keeping that particular revelation close to her chest.

Things really pick up when Luce and her partner, Detective John Rixton, hear of a body being found in the bayou. Could it be their missing teen Angel Claremont? On discovery,
Lucy realizes it is not Angel, but an adult woman with the same markings on her body as Luce. Then, a strange group of men from White Horse Security shows up. Apparently, they were hired by Angel's family to track down their daughter. They end up helping Luce rescue the mysterious woman found in the swamp in the same manner Luce was found. Then her best friend Maggie disappears and Lucy finds herself working with Cole Heaton.

Cole is an in your face character who doesn't believe Lucy's excuses of having dissociative amnesia and memory loss from her time before she was found in the swamp. What makes Cole so mysterious is that his ringtone is the same as the one that Ezra uses to call Lucy. Ooooohhhh, creepy! Cole also seems to be a wealth of information regarding where Luce came from and what the marks on her body mean. With the arrival of Cole and his crew, Lucy has a chance to find out about her past, and more about the mysterious Ezra who apparently gives Lucy a boost every year.

I admit there was really good mystery that was slowly revealed some interesting twists. I admit I loved the fact that there was a lack of romance between Lucy and any character. I loved Edward Boudreau, as well as Harold Trudeau and her partner Detective John Ricton. I enjoyed that there's a lack of shifters, or vampires, or werewolves, but intriguing enough to admit that when Lucy's past is revealed, I was actually stunned silly. Yes, that is possible.  Apparently, the sequel is up on NetGalley to be requested by those who live in Australia only. So, disappointing.