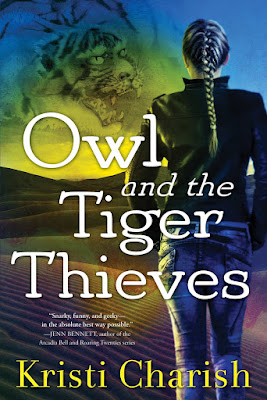 In this fourth Owl novel, Kristi Charish (The Voodoo Killings) melds sparkling fantasy with the grit of urban underbelly—with a detour through the world’s most spectacular cities. This is perfect for fans of Kim Harrison, Jim Butcher, Jennifer Estep, Jenn Bennett, and fantasy lovers everywhere.

Through no fault of her own, Alix has found herself essential to the fate of the world as we know it. She didn’t mean for this to happen—she was quite happy being merely the notorious antiquities thief, and ex-archeologist, known as Owl.

However, years ago, Owl reluctantly entered the secret world of the supernatural. Her goals: complete one job, escape one bounty on her head, continue her thieving in peace.

Fast forward to today. Now, she has become a key player in a brutal paranormal civil war that is rapidly getting out of hand. The leader of one of these factions—a lethal opponent called the Electric Samurai—grows more powerful by the second. To stop him, Owl sets out to find the long-lost, legendary group known as the Tiger Thieves.

But will it be too little too late? One thing Owl misses about “normal” archaeology: there are few emergencies with thousand-year-old relics.

Owl and the Tiger Thieves is the fourth installment in author Kristi Charish's The Adventures of Owl. Alix Hiboux is the Owl, a modern day Indiana Jane who handles supernatural monsters, temperamental dragons, angry Nagas, and slippery ninjas as she races to stop a brewing supernatural war between her employer and a supernatural faction that wants to come out into the open. Oh, and an Electric Samurai who may turn the world on its head if he succeeds. As the story opens, our train wreck of the archaeological world, Owl, has gotten herself in a bit of trouble in an ancient pirate jail known as St. Albinus of Angers.

Needless to say Owl's rules of never being caught, knowing where the treasure is before breaking in, having an escape route planned out before you start, goes out the window quickly and continually. Haven't read Owl and the Electric Samurai yet? Do so now! Everything that happened in the third installment drives Owl's actions in this book. You need to really understand Alix and what she is experiencing since coming back from Shangri La. You need to understand that she's become somewhat of a liability with the IAA constantly on her back, and the fact that she tends to leave a trail of destruction behind wherever she goes.

You have to understand that she stopped caring whether she lived or died which makes her dangerous. She blames herself for what happened in Shangri La, but she has to refocus her efforts to find a way to defeat the Electric Samurai. The Silk Road was once an ancient trade route paved with fortunes and tears in equal measure. The tears part mostly due to the distinct chance of being gutted by an opportunistic supernatural lying in wait. Somewhere among the trade cities lost to the ages, the Tiger Thieves, assassins who once guarded the Silk Road against the supernatural monsters that preyed on ancient caravans—still hide. Shame no one has seen one of them in over five hundred years, since they’re the only ones who might be able to help Owl stop the reign of the Electric Samurai and the descent of the world into supernatural chaos in all its eviscerating glory.

From a Peruvian jail to Venice to Timbuktu, to meeting Leonardo Da Vinci, Owl searches for the Tiger Thieves in the hopes of convincing them to help her—all while fetching artifacts and weapons for Mr. Kurosawa’s brewing supernatural war. Considering diplomatic negotiations aren’t exactly Owl’s strong suit, she has her work cut out for her. Not to mention that her sidekick on this adventure, Artemis, leaves a lot to be desired and little to trust. Poking a tiger is never a good idea, and tangling with the ancient assassins will take everything Owl has. Eventually, she’ll have to decide whether she’s a wayward archaeologist or just another cold-hearted thief.

Every goddamned time, they had to raise violent dead things. Why, oh why, couldn't we aim for anything else? Like an army of harmless bunnies?

This story has everything from pirate ghouls, to the monsters who voted to come out of the closet, to the Electric Samurai and his growing army of humans and supernaturals, to a very curious Leonardo Da Vinci and his inventions, to Wisps who consume victims warmth, to Medusa and her mermaids, to skinwalkers, all of whom make Alix's journey even more action packed and dangerous. The supporting cast of Nadya and Oricho is mostly off screen for the entirety of the story. Only Artemis being with Alix gives her any chance of fulfilling her mission. Even a brief encounter with Lady Siyu and her desire to kill Alix show the levity of how dangerous her life really is.

"Madness is defined by some as repeating the same action over and over, expecting to get a different result."

I have to say that this series, and this author is underrated. I think if more readers found the time to read this series, it could be an series that reaches every single age group. Who doesn't love Indiana Jones, or Lara Croft, or Benjamin Gates? There is plenty of hijinks, plenty of Captain, the Mau cat who loves to play with vampires, and plenty of action to keep even the most jaded reader impressed with how fast paced this story really is. Yes, there is some romance, but it's most left on the side lines in this installment and for good reason. I'm also going to say that it is with my fervent hope, especially with the twisted ending the author leaves us, that a fifth installment is in store soon. I see an whole new avenue for Owl developing.

"Sometimes magic waits until the most inopportune moment to wreak havoc. It leans towards chaos, a bit of a bitch like that and not unlike supernaturals."