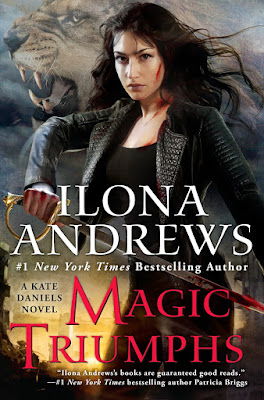 Mercenary Kate Daniels must risk all to protect everything she holds dear in this epic, can’t-miss entry in the thrilling #1 New York Times bestselling urban fantasy series.

Kate has come a long way from her origins as a loner taking care of paranormal problems in post-Shift Atlanta. She’s made friends and enemies. She’s found love and started a family with Curran Lennart, the former Beast Lord. But her magic is too strong for the power players of the world to let her be.

Kate and her father, Roland, currently have an uneasy truce, but when he starts testing her defenses again, she knows that sooner or later, a confrontation is inevitable. The Witch Oracle has begun seeing visions of blood, fire, and human bones. And when a mysterious box is delivered to Kate’s doorstep, a threat of war from the ancient enemy who nearly destroyed her family, she knows their time is up.

Kate Daniels sees no other choice but to combine forces with the unlikeliest of allies. She knows betrayal is inevitable. She knows she may not survive the coming battle. But she has to try.

Magic Triumphs is the tenth and final installment in Ilona Andrews Kate Daniels series. What an absolutely brilliant way to end the series that got me started as a blogger. True fact! The series is set in alternative Atlanta where mercenary Kate Daniels-Lennart has kept the paranormal elements of Atlanta, which includes shapeshifters, vampires, witches, mages, mercenaries, and necromancers, in check along with her husband Curran.

As the story opens, readers are introduced to the brightest, the cutest, the most dangerous baby you will ever meet; Conlan Lennart. Unfortunately, Kate's father Roland desires the baby for himself to do what he did to Hugh, and would have done to Kate had she not escaped. It is all hands on deck in order to prevent Roland from winning. If Roland takes the baby, it is the end of everything that truly matters.

The story then moves 13 months into the future where we find Kate dealing with a new role as mother of an extraordinary child. as well as going back to work at Cutting Edge. But, something really bad happens which leads to a stunning revelation. When Kate receives a strange gift, she knows that things are quickly moving towards a major conflict with a villain who might be more powerful than Roland. The fact is, Kate's family has met this villain and wasn't the winners.

As much of a threat that Roland is on his own, this new villain is supercharged, and has an army that could easily ride through Atlanta and destroy everything and everyone Kate loves. It's nice that the authors have come up with such a dynamic villain along with his followers who we've seen before ::hint hint:: I have said this before, I shall say this again, please do yourself a huge favor and read Hugh and Elara's book. What happens in Hugh's book, happens in Kate's finale in a much, much grander way.

Even though there are some who consider Kate to be too powerful, she attempts to do the impossible. Bring all factions together in order to save Atlanta and defeat the villain. From the Pack, to the Order, to The Guild, to The People, and everyone else who stands alongside Kate in her desire to keep the newest villain from not only destroying Atlanta, but the world as well. In all honesty folks, even though I give this book FIVE huge stars, I would have loved to have one final battle between Kate and Roland, with Hugh, Elara, Conlan, Erra, Evdokia, Andrea, Teddy Jo, Raphael, Derrick, Saiman, Christopher, and Julie to name a few on Kate's side.

I have to say, that while I am sad that this is the end, I absolutely believe it is the right time to walk away. Who knows readers, we might see Kate, Curran and the crew back for yet another visit sometime down the road. As I peer into my crystal ball, I foresee a series featuring Conlan Lennart. He is so adorable, and badass, and every single time he was in a scene I was laughing and laughing, and I couldn't help not wanting a Conlan of my own! I am happy that my wish was granted in that Hugh and Elara came to help Kate and mended some battered fences. After all, who is more of a brother than Hugh? Kind of curious where the authors will take a few others characters from here. You know that they will most likely continue with Julie and Derek sooner, rather than later. You know that Hugh and Elara have another book or two to come. Wherever they go, I will be there.
In the immortal words of the group known as the Doors: