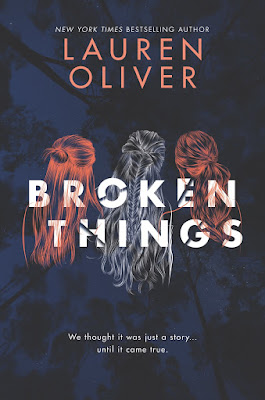 In this standalone teen novel, New York Times bestselling author Lauren Oliver weaves a tale of mystery and murder as two girls grapple with the terrors of their past and uncover the truth about their friend’s murder.

It’s been five years since Summer Marks was brutally murdered in the woods. Everyone thinks that Mia and Brynn killed their best friend, driven by their obsession with a novel called The Way into Lovelorn, a magical world that the three girls imagined themselves into until it turned twisted and sick and deadly.

Unable to explain what really happened to Summer, Brynn and Mia have both found different, painful ways to hide from a world that hates them—a world that will never feel magical, or safe, ever again.

On the anniversary of Summer’s death, a seemingly insignificant discovery resurrects the mystery and pulls Mia and Brynn back together once again. But as past and present, fiction and reality, begin again to intertwine, Brynn and Mia must confront painful truths they tried for so long to bury—and face the long shadow of memory that has been waiting all this time.

Lauren Oliver's Broken Things is a twisty, edge of your seat thriller with a whodunit mystery, a long-buried truth, high emotions, bitter betrayals, and a secret danger that is still lingering out there. If you've read We Were Liars, or One of Us Is Lying, then this book is for you. Brynn McNally, Mia Ferguson, and Summer Marks formed a tight bond that they all rely on heavily, for different reasons, even if those reasons turn unhealthy. They were each in love with a book called Lovelorn that was never finished by the author.

5 years ago, Summer Marks was found murdered not far from the place where she, Brynn and Mia hung out while working on a fan fiction entitled The Way into Lovelorn. In the story, the girls pretended to be the three characters, Summer was the leader Ava, Brynn was the protector, Ashleigh, and Mia was the quiet one Audrey. The police had only three suspects, Owen Waldmann, Brynn, and Mia. They became known as the Monsters of Brickhouse Lane.

In the aftermath, all three suffered in silence and had their lives uprooted. In the months and years that proceeded the murder, each of their lives went in strange directions. Brynn, who was outed as a lesbian, decided that she was going to escape and as the story picks up, has been in 6 different rehab facilities for alcohol and drug addiction. In truth, there's nothing wrong with Brynn. What truly scares Brynn is the real world, especially the people back in Twin Lakes who still see her as a killer.

She doesn't know where to go since her mother and sister have pretty much ignored her, so why not stay where she is? The only person who seems to want to help her is Wade Turner, who just happens to be her cousin who has been trying to prove she's innocent. Then, Brynn receives an unexpected visit from Mia. The same Mia who broke Brynn's heart by betraying her to the cops. Summer's ghost still hangs over the town of Twin Falls, as well as Mia and Brynn's actions when it comes to how badly they allowed themselves to be treated by their so called best friend.

Mia is haunted by the words she said when the police questioned her about Summer: "ask Brynn." Claiming she was not there, Mia stayed home with her horde of a mother. When school became too tough, Mia opted for home schooling that kept her in the safety of her house all day. Making friends with YouTube celebrity Abby, who moved in two years ago and does not care about Mia’s supposed involvement with Summer’s death. But, after Mia finds a clue while cleaning out her home, she decides to call on Brynn.

When Brynn and Mia are brought back together by the fifth anniversary of Summer’s murder, despite their baggage from the murder case, they decide to work together to seek out answers as to who really was responsible for murdering Summer and leaving Mia, Brynn, and Owen to take the fall. Meanwhile, Mia and Owen have always known they were meant to be together, even as childhood best friends—but Summer’s involvement and her murder drove a wedge between the two of them. Now their unresolved feelings for each other add an additional current of tension through the story.

Brynn is attracted to other girls and struggles with this identity as she navigates relationships and bullying. In her teenage story line, however, she and another character connect in a sweet romance, in the margins of the murder mystery. This story alternates between Brynn and Mia, as well as going back in time. You also never really get to see the story from Summer's point of view, which would have been pretty interesting considering what she's portrayed as by both Brynn and Mia. I discovered an Easter Egg in the story about 30% of the way in, and it gave me the clue to guess who the real killer was.

Overall, I felt more for Brynn, than I did Mia. Mia found a friend who didn't judge her. Brynn was pretty much outed and left behind without anyone trying to help her. I can understand Brynn more than I can Mia, and that should pretty much tell you that I've dealt with similar issues.