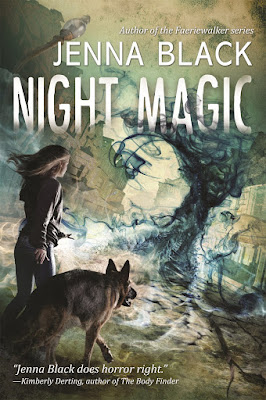 Jenna Black returns to the quarantined city of Philadelphia, where an unsuspecting seventeen-year-old has unknowingly unleashed a dark power that transforms the city into a monstrous hellscape.

Once, the guilt of having inadvertently let the night magic into the city—and of having killed her onetime best friend—had threatened to destroy Becket Walker. But now she’s been Nightstruck, and all her grief and guilt and terror have been swept away—along with her conscience. So what if she’s lost her friends, her family, and her home? And so what if her hot new boyfriend is super-controlling and downright malevolent?

Mesmerized by the power and freedom of not having to care about anyone but herself, Becky is sinking ever deeper into the night magic’s grasp. But those who love her refuse to give up on her—even if she’s given up on them. If they can’t find a way to help Becky break the night magic’s hold, the entire city might soon find itself shrouded in perpetual night. But the last thing Becky wants is to be “rescued” from her brand new life, and she will fight tooth and claw to stay exactly where she is.

Jenna Black's Night Magic is the second installment in the authors Nightstruck series. 17-year old Becket Walker has been tricked into opening a door between worlds, allowing a dark magic into the mortal world. As the magic trickled in, the city began to change at night. Strange creatures roam the streets, inanimate objects come to life, such as potholes turning into toothy mouths and wires turning into strangling vines, all of them bloodthirsty and terrifying.

Venturing out at night has become a dangerous proposition, and the moment the sun sets, most of the citizens of the city shut themselves up in their houses and stay there even in the case of dire emergencies. Yet, even that won't protect you from certain creatures who have zero fear of gaining access to your home. Becket has become part of what the author calls Nightstruck. These are people who went out during the transition from light into dark, and got stuck and can't return to the light of day.

The one constant is that they all have the same vivid green eyes, little or no guilt, grief, or insecurity. Robbing, partying and watching people being killed is part of life as a Nightstruck, but Becket doesn't feel the desire to join in. Becket and the villain of the story, Aleric have become thick as thieves and enjoy plotting, scheming, breaking into stores which Becket could never ever afford before, and partying like it's 1999.

But, there's still guilt about her actions at the end of the previous installment, and Becket hasn't lost all connection with Luke. With the City of Philadelphia under quarantine & the government believing its people have been infected with some sort of madness that can't be explained, Becket has to decide whether she is going to remain a villain, or become the savior that her city needs and defeat Aleric who has apparently decided that Becket's blood is key to world domination.

I do think it's important to read the first installment before reading this story. In my opinion, the first part of the story was the least effective, but necessary to show Becket's state of mind which led her to being Nightstruck and the actions she takes that she would have never made had she not become stuck. The final part of this story is the best, but I wonder if another book is really in the works or not? Anyone?

The story ends on what is essentially a cliffhanger, but I haven't seen anything on the author's page, the publishers, or anywhere else for that matter whether a third book is in the works or not. I am of one mind that if you already released two books in a series, then please go ahead and release the final installment so that it doesn't leave readers with a bad taste in their mouths.