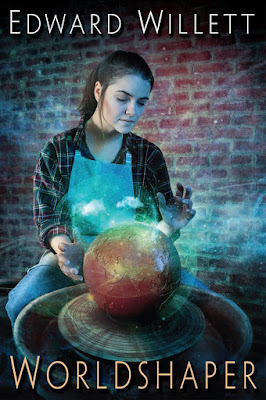 From an Aurora Award-winning author comes the first book in a new portal fantasy series in which one woman’s powers open the way to a labyrinth of new dimensions.

For Shawna Keys, the world is almost perfect. She’s just opened a pottery studio in a beautiful city. She’s in love with a wonderful man. She has good friends.

But one shattering moment of violence changes everything. Mysterious attackers kill her best friend. They’re about to kill Shawna. She can’t believe it’s happening—and just like that, it isn’t. It hasn’t. No one else remembers the attack, or her friend. To everyone else, Shawna’s friend never existed…

Everyone, that is, except the mysterious stranger who shows up in Shawna’s shop. He claims her world has been perfect because she Shaped it to be perfect; that it is only one of uncounted Shaped worlds in a great Labyrinth; and that all those worlds are under threat from the Adversary who has now invaded hers. She cannot save her world, he says, but she might be able to save others—if she will follow him from world to world, learning their secrets and carrying them to Ygrair, the mysterious Lady at the Labyrinth’s heart.

Frightened and hounded, Shawna sets off on a desperate journey, uncertain whom she can trust, how to use her newfound power, and what awaits her in the myriad worlds beyond her own

Series Overview: One woman’s powers open the way to a labyrinth of new dimensions in the fantasy Worldshapers series.

Worldshaper is the first installment in author Edward Willett's Worldshapers. It is the story of Shawna Keys, living what seems an idyllic life in a small Montana city. She’s just opened her pottery studio, she has a boyfriend (Brent), a best friend (Aesha), and she’s looking forward to the rest of her life. Then suddenly, everything changes. Terrorists attack the coffee shop where she’s gone with her friend Aesha, killing Aesha and many others. The leader of the masked attackers called the Adversary, touches her, calls her by name and then points a gun at her head.

She’s about to die, but she refused to believe it’s happening and just like that, it isn’t. The attackers are gone and the coffee shop is intact but Aesha and everyone else who was killed has vanished. In fact, no one else even remembers they existed! A stranger, Karl Yatsar, shows up and explains to Shawna that the world she thinks is the only world is, in fact, a construct: a world she Shaped to be the way it is. Not only that, there is an entire Labyrinth of Shaped worlds, and all are in danger from the Adversary who has invaded her world and will, inevitably, steal it away from her.

Karl tells her she cannot save her own world, especially now that the villain has stolen something from her, but she has the power to save all these other worlds, by traveling through them, absorbing the knowledge of how each has been Shaped from the Shapers living within each one, and transporting that knowledge to Ygrair, the woman at the center of the Labyrinth, and the one who, though Shawna inexplicably doesn’t remember it, gave her this world to Shape in the first place.

*Note* This was probably the most frustrating thing about the story. The author leaves zero clues as to why Shawna has no memories of her time on the First Earth, or what really happened for her to lose them in the first place. Although I have made some educated guesses, I am not 100% they are correct.

In Worldshaper, Karl and Shawna flee through a world changing around them, sometimes at Shawna’s behest, sometimes at the Adversary’s, to escape through a Portal into the next world. In the end, the series will take Shawna from world to world, each unique (steampunk worlds, worlds plagued by vampires and werewolves, film noir worlds, epic fantasy worlds) as she tries to save as many as she can from the Adversary. Along the way, Shawna will face many challenges, physical, spiritual, and ethical, as she comes to grips with her power, and the responsibility of creators for the worlds they create.

Karl stumbled through the door, spun, slammed it closed, then slapped his palms against the rusty steel. Blue light crackled across the metal, briefly outlining the KEEP OUT: DANGER sign, faded red paint on white, that hung at eye level.
He rested there for a moment, breathing hard, then straightened and turned to see what kind of world he had entered.
He stood in a dark, rough-hewn tunnel of stone, narrower at the top than at the bottom, shored up by beams of dark wood. A dim light bulb, hanging on a twisted pair of rubber-coated wires, glowed overhead, swaying from the gust of warmer air that had entered this world along with Karl. The swaying bulb cast shifting shadows up and down the walls and across the floor, but he could see well enough to make out two metal rails, spanned by rotting wooden ties, running along a rubble-strewn floor toward the faint outline of another door. The gray light seeping around its edges spoke to him of twilight, though whether morning or evening he did not yet know.
He turned to look at the door he had just closed. On this side, it was made of rusty steel and set in a barrier of corrugated metal. Bits of broken chain scattered the floor beneath it, and a shattered padlock lay near his feet. No lock or chain could hold against the opening of a Portal.
No light spilled from beneath the door, even though he had come through it from the common room of a torch-lit inn. No sound came through it, either, though the inn had been bustling. The man who had been following him, who had started running through the common room, shoving people out of his way as Karl opened the Portal, had been too slow. By the time he opened the wooden door he had seen Karl pass through, he would find nothing beyond it but the inn’s pantry.
That should have been the end of pursuit, but Karl had thought the same when he’d entered the world he’d just fled . . . and somehow the Adversary had followed him into that world, even though he had closed the last Portal behind him exactly as he had closed this one. Which meant, if the man who had been following him was a servant of the Adversary—as he almost certainly was—soon enough the Adversary would come to this Portal, and perhaps force it open as well.
Which meant his time was limited. He needed to find this world’s Shaper, see if this one might be strong enough to do what Ygrair required, and if so, convince or coerce him or her to accompany him.
He had no reason to hesitate, and indeed, every reason to hurry, but hesitate he did. He had entered many worlds, yet this one gave him pause. Without taking so much as a second step into it, he knew from the flavor of the air, from the way its gravity tugged at him, from the faint echoes of his breath and movements back from the tunnel’s stone walls, that this world was similar . . . very, very similar . . . to the First World, the one from which Ygrair had taken him . . . how long ago had it been?
An old way of thinking, that. Time flowed differently from world to world within the Labyrinth. How could you measure time when some of worlds you visited did not orbit suns, but were orbited by them, or were lit by flaming chariots drawn by fiery flying steeds, or were not lit at all, except by the moon and the glow of the eldritch stones that paved their roads and formed the walls of their strange, twisted buildings?
Each world in the Labyrinth was Shaped, to a greater or lesser degree, by a singular imagination. This one had been Shaped less than most, so that it closely resembled the First World—but it was not the First World. Just another world in the Labyrinth. Nothing special at all.
He glanced back once more at the metal door. In any event, if the Adversary were able to enter this world as he had the last, it would soon be re-Shaped . . . unless its Shaper was, at last, the one Ygrair had sent him to seek.
He turned away from the closed Portal for good, then, and strode toward the door into the outside. It opened with a push, and he stepped out into the fresh air of a mountain evening. He took a deep breath, enjoying the scent of pine, then looked up at the starry sky. The constellations were the same ones he had seen as a child, lying on his back in the yard of his father’s farm, dreaming of the day he would be old enough to leave it. The Earth’s great cities had seemed like different worlds to him then, and he had longed to see them all: New York, London, Paris, Berlin.
He’d done it, too, travelling to those and so many more. He’d even created his own worlds, after a fashion, on stage and in his words. But then Ygrair had literally fallen into his life . . . and he had learned just how stunted his understanding of new worlds had been.
And she has promised, he thought. Someday I, too, will have a world to Shape.
But only if he succeeded at the daunting task she had set him. Which I had better be about. Lowering his gaze, he strode into the darkness.