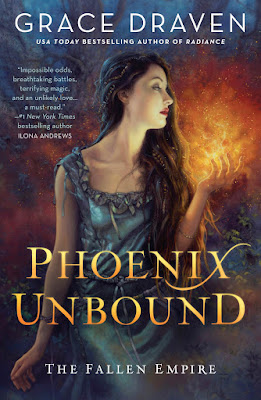 A woman with power over fire and illusion and an enslaved son of a chieftain battle a corrupt empire in this powerful and deeply emotional romantic fantasy from the USA Today bestselling author of Radiance.

Every year, each village is required to send a young woman to the Empire’s capital—her fate to be burned alive for the entertainment of the masses. For the last five years, one small village’s tithe has been the same woman. Gilene’s sacrifice protects all the other young women of her village, and her secret to staying alive lies with the magic only she possesses.

But this year is different.

Azarion, the Empire’s most famous gladiator, has somehow seen through her illusion—and is set on blackmailing Gilene into using her abilities to help him escape his life of slavery. Unknown to Gilene, he also wants to reclaim the birthright of his clan.

To protect her family and village, she will abandon everything to return to the Empire—and burn once more.

Series Overview: Women and men of power join together to fight against a corrupt, dying empire in this romantic fantasy series

Grace Draven's Phoenix Unbound is the first installment in the authors Fallen Empire series. The story alternates between Gilene of Beroe, and Azarion, a Savatar warrior who has spent 10 years as a slave and Gladiator. One could say that this is a story of enemies who become lovers, not unlike Amanda Bouche's A Promise of Fire. Every year, each village is required to send a woman to the Empire's capital to be used as prostitutes for the slave-gladiators fighting and to be burned alive as a sacrifice to the Gods in the Rites of Spring.

For the past five years, Gilene, a fire witch with the ability to manipulate her appearance has been participating in this callous event to protect the women in her village. But this year is different. Things are different because Azarion, a famous gladiator who can see through her illusion, blackmails her to escape the clutches of slavery. For 10 years, Azarion he has been a slave and one of the Empire's top gladiators. He has been biding his time until the right moment to escape his tormentors, especially the Empress who uses him as entertainment and her personal sex toy.

It is fair to say that I had a Déjà Vu moment while reading the beginning of the story. It was eerily familiar to A Promise of Fire. Here you have a female protagonist who is kidnapped and used by the male protagonist. She is dragged far from her home and her brothers who are stunned when Azarion takes her and quickly disappears. Azarion really wants only one thing from Gilene. He needs a so called agacin (Fire Witch) to reclaim his birthright, and what's more impressive than someone who can use illusion and fire to survive?

I'm impressed by the author's world building. I am even OK with how dark and wicked this story was in the first part of the story. This is the first story that I have read by the author, but have heard that she is at the top of her game when it comes to fantasy/romance novels. They weren't wrong. I have so much respect for Gilene. Here is someone who has spent years protecting other young women of her village, sacrificing herself over and over again, and then expecting to continue until someone else can take her place.

Over the course of the story, she grows leaps and bounds and makes herself undeniably the strongest character in this story. I also respected Azarion, even though I didn't think what he did was the right thing to do. But, he does understand something that Gilene doesn't. Her village and family doesn't really care about her, or her feelings, or her future. They only care that she makes sure that she is the tithe every year without failure. And, if she suddenly disappears without a trace thanks to being kidnapped, well, pox be upon her for allowing it to happen in the first place!

Recommendation: Yes, absolutely. I can honestly say that I would be perfectly fine were this to be a standalone. After all, you have a beginning, a middle, and a pretty clear ending. What else do you need?