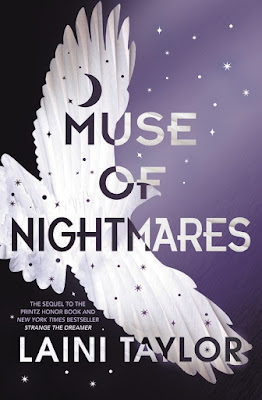 Sarai has lived and breathed nightmares since she was six years old.
She believed she knew every horror, and was beyond surprise.
She was wrong.

In the wake of tragedy, neither Lazlo nor Sarai are who they were before. One a god, the other a ghost, they struggle to grasp the new boundaries of their selves as dark-minded Minya holds them hostage, intent on vengeance against Weep.

Lazlo faces an unthinkable choice--save the woman he loves, or everyone else?--while Sarai feels more helpless than ever. But is she? Sometimes, only the direst need can teach us our own depths, and Sarai, the muse of nightmares, has not yet discovered what she's capable of.

As humans and godspawn reel in the aftermath of the citadel's near fall, a new foe shatters their fragile hopes, and the mysteries of the Mesarthim are resurrected: Where did the gods come from, and why? What was done with thousands of children born in the citadel nursery? And most important of all, as forgotten doors are opened and new worlds revealed: Must heroes always slay monsters, or is it possible to save them instead?

Love and hate, revenge and redemption, destruction and salvation all clash in this gorgeous sequel to the New York Times bestseller, Strange the Dreamer.

Muse of Nightmares is the second and apparent final installment in author Laini Taylor's Strange the Dreamer series. After the prologue where two new characters (Kora & Nova) are introduced, the story itself picks up right where the first installment left off with Sarai's fall, and Lazlo's ascension as one of the children of the Gods. Kora and Nova's story takes place mostly in the past, while Sarai, Lazlo, Minya, & Thyon's story takes place in the present tense.

With the strange ending of the first story, it now appears as though Minya, the girl who is stuck in the body of a 6-year old, is now taking charge of those she not only saved. She is more powerful than anyone realized. But, Lazlo has finally found out who he really is and where he belongs and how he is able to bend mesathium and even move it. Sarai, Lazlo, Ruby, Sparrow, and Feral must try to convince Minya not to send her army of ghosts to attack the people of Weep, or take vengeance on the man, Eril-Fane, who ended the domination of the Gods over Weep 15 years ago.

I am a fickle reviewer at times. I will be honest in saying I really loathed Minya. But, the author then has Sarai, the queen of nightmares, go back in time and uncover what really happened the day 15 years ago when she, as a 6-year old, was able to save 4 children from being murdered in their cradles. Then I really found myself cheering for her when their sanctuary is torn asunder by one of the new characters, and it become clear that Minya is really a badass.

Down in Weep, Eril-Fane, as well as Thyon Nero, are dealing with a new reality. Both have questions as to how Lazlo ended up in Zosma, and not with the rest of the mesathium. One of the more interesting facets of the story is the relationships. Thyon isn't from Weep, and his choices in regards to Lazlo and what was stolen from him, have weighed heavily on his mind. Especially now that Lazlo has found out who he really is.

Whereas Eril-Fane and his wife Azareen are trying to see if they are able to rekindle the love that was lost when he was taken by the Gods, and used as a sex toy. For Thyon, fact that he is now actually making friends with those who just a few hours, or days ago he was looking down his nose at them. For me, it was fun to watch Thyon grow up as a character and take responsibility for his action while also uncovering a secret that was wiped out by the gods. The real name of Weep.

What's interesting in Nova and Kora's story, is how utterly fascinating it is how the world's connect. It's also fascinating how Kora's story gives readers an idea at how the gods manipulated people to their will, and then shipped off the unwanted children to various other universes. While Kora was trying to save the children she could, Nova was tearing apart the universe searching for the sister who was taken away from her.

This is a long book. Get used to it. But, I will say that I am not sure that the Nova, Kora angle was worth all the pages that it took up in this book. I loved the romance between Lazlo and Sarai. It's absolutely adorable. Laini Taylor has a fascinating imagination, and I would not be surprised if a spin-off was written about the exploits of a group of secondary characters we've already met, like Thyon, and Calixte, in searching other universes for the missing children of the Gods.

Even though all of these characters, minus the adults like Eril-Fane, are 15-16, the author seems not to care that she puts them in curious sexual situations, especially Sarai and Lazlo. In the end, the story revolves around Can the Godspawn save their fallen brethren and stave off an attack by a character who would tear the universe apart to find her sister? Can the citizens of Weep rebuild or is their precious township lost forever? As occurred within Strange the Dreamer, the narration jumps between the various characters, all telling their point of view.