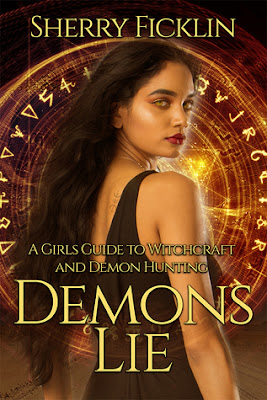 Orphaned by an unspeakable evil, Aria Dupree is the last of her line. A powerful witch tasked with guarding the boundaries between our world and the world of demons who prey on humankind, Aria has gone rogue. Now she’s out to find and destroy every single gateway into our world and kill every demon that she can find--including the one who murdered her mother.

But, as it turns out, hunting is the easy part; it’s graduating high school that might kill her. Red Prairie Texas isn’t just another stop on her demon hunting world tour and an unlikely alliance might be exactly what she needs to keep from becoming a slave to the very darkness she’s been fighting against.

Because the devil is coming down to Texas--and only Aria can keep all hell from breaking loose.

DEMONS LIE is the first in a dark paranormal series full of magic, monsters, and mayhem

Demon's Lie is the installment in author Sherry D. Ficklin's A Girls Guide to Witchcraft and Demon Hunting series. The story is told in the first POV by 17-year old Ariadne "Aria" Dupree. Aria has arrived in the West Texas town of Red Prairie searching for demons. Aria is driven by revenge. For the past 3 years, Aria has focused on 3 main goals: killing every single demon that crosses her path, finding the one responsible for ripping her family apart, locate and destroy all gateways.

Aria is known as a Buidseach aka Witch aka Demon hunter. Buidseach's are supposed to guard & protect gateways that demons use to enter this world. Aria's mother was also a Buidseach as well as her grandmother. But, now, she is alone in the world and nothing will stop her from completing her mission. After killing one demon fairly easily, she realizes that she was too lax in her duty, and someone was killed in the process. Aria later enrolls in Red Prairie, High School where she is drawn to find a demon who is hiding out as a human.

Little does she know that the demon she thinks she is supposed to kill, Ben, is a charming, funny, nearly perfect high school boy who will tear at every single one of her emotions. Their relationship is sappy as hell, but fun to watch as Aria has to open her heart to someone who breaks all the rules. If that weren't enough, she meets Maddie Brown, who, not only will become her best friend, but also someone it seems that fate has chosen to help Aria. What shocks Aria the most is that Maddie has a dormant magical spark that seems to sense. Aria seems to have a forbidden physical attraction to Ben which makes this extremely complicated.

Aria, who is a pretty badass hunter with mad skills, soon realizes that it will take all her skills, all her snark, and all her arsenal to protect the people she has opened her heart to before the boy she loves is torn asunder, and she loses the only apprentice she has ever had. Can Aria walk the thin line between doing what is expected of her, while continuing to search for the demon who killed her mother? Read the book and find out! ::grin::: I loved that Aria has a group of rules that she tries to live by.

Such as Rule # 1 Demon's Lie. There are no absolute good v bad, or right v wrong when it eliminates the human element. I give props to the author for not going all in on the high school hi-jinks and angst. She stuck to her guns and didn't have any mean girls or any real nasty bullies to pushed Aria's buttons to the limit. While this book is about demons, it is the relationships that take over the main story-line for the entire book.

Determination: yes, I will be reading the sequel whenever it comes out. Aria's next stop should be loads of fun!