#Review - Once a King by Erin Summerill #YALit #Fantasy 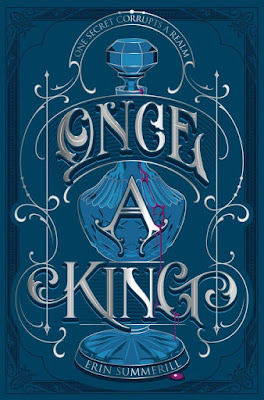 A young king searches for a way to save his kingdom in this romantic fantasy from Erin Summerill, who was called “absolutely marvelous” by New York Times bestselling author Sarah J. Maas.

Aodren: A lonely, young king, searching for a way to dismantle his father’s dark legacy.
Lirra: A girl with the power to control the wind, torn between duty and following her dreams

For twenty years, Channelers—women with a magical ability—have been persecuted in Malam by those without magic. Now King Aodren wants to end the bloody divide and unite his kingdom. But decades of hatred can’t be overcome by issuing decrees, and rumors of a deadly Channeler-made substance are only fueling people’s fears. Lirra has every reason to distrust Aodren. Yet when he asks for help to discover the truth behind the rumors, she can’t say no. With Lirra by his side, Aodren sees a way forward for his people. But can he rewrite the mistakes of the past before his enemies destroy the world he’s working so hard to rebuild? Erin Summerill returns with a high-stakes fantasy full of romance, magic, and revenge perfect for fans of Susan Dennard and C. J. Redwine.

Once A King, by author Erin Summerill, is the third installment in the authors Clash of Kingdoms series. For those who have not read Ever the Hunted, or Ever the Brave, this story actually takes place shortly after the end of the second book in the series. The story is told through the split narratives of Lirra Barrett and Malam King Aodren, both of whom have unique personalities that totally come through. The chemistry between Aodren and Lirra is electric. Readers will love their building tension and slow-burn romance.

Aodren is a character who readers will have met in the first two installments in this series. In fact, he had a sort of relationship with Britta Flannery who has since exited this series stage left to enjoy her happy ever after. Lirra and Aodren also have a history which I won't spoil for you since you can read the book and figure it out yourself. He is a young king who is trying to do whatever he can to fix the problems that were started by his father, and continued by a Regent who hated Channeler's and wanted to remove them from his country.

Aodren has struggles to move his country forward. His country is still deeply divided, and there are those who still don't trust the Channeler's who have access to the five elemental magics. There is also a strange new black market version of a healing potion which is only supposed to be found in one country in particular. If that weren't enough, this year is the All Kingdom Summit which takes place every 5 years. Aodren hopes that he can convince those from Shaerdan, and other countries to open up their trade to his country and that he is absolutely set on rewriting the past mistakes of his country.

Lirra is known as the Archtraitors Daughter and is well versed in espionage, and knowing the right people. She is a Channeler who uses wind magic and was instrumental in helping save the day alongside Britta in Ever the Brave. Lirra has been living in Shaerdan since her father took her away from Malam after her mother was killed. Lirra's father sells secrets to the highest bidder, which doesn't exactly make him popular, but he's trustworthy enough that Aodren asks for his help which leads to Lirra's involvement in a stunning mystery where the villain can be anyone.

Lirra finds herself working side by side with Aodren to uncover the mystery behind the fake Sanguine hitting the trading routes and causing so much animosity that it is clear someone is trying to destroy Malam and its King. The chemistry between Aodren and Lirra is electric. Readers will love their building tension and slow-burn romance. This story is the perfect combination of political intrigue, mystery, and action as Aodren races to find the truth before it's too late, and Lirra finds herself up to her hip in intrigue, suspense, and a future that she wants, not one that is to follow in her father's footsteps.