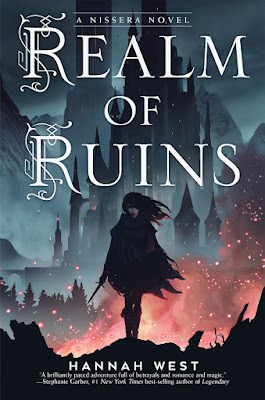 Valory’s power is different…it’s dangerous, unruly, and destructive. Can she channel it to crush a cunning enemy and save the realm from chaos? Dark magic and romance make the latest installment in the Nissera Chronicles a page-turning read.

Welcome to Nissera, land of three kingdoms and home to spectacular magic.

A century after her legendary ancestors overcame a bloodthirsty tyrant, seventeen-year-old Valory Braiosa attends a training academy for elicromancers, immortal beings with magical gifts. Yet Valory’s immense power seems impossible to tame, and she faces imprisonment by the Nisseran authorities. Then a forbidden resurrection spell awakens a long-dormant evil, and Valory may be the only one who can vanquish this terrifying villain. Together with a band of allies—including an old friend; a haughty princess; and a mysterious, handsome stranger—Valory must learn to harness her power and fight back.

Weaving together her imaginative world of magic with snippets from Beauty and the Beast and other classic stories, Hannah West’s gritty adventure is a thrilling, immersive companion to her acclaimed debut. Read this first and then discover the rest of Nissera or start with Kingdom of Ash and Briars—either way, you’ll love the journey.

Hannah West's Realm of Ruins is the companion novel to Kingdom of Ash and Briars. The story takes place 100 years after Kingdom of Ash and Briars so, no, you won't find any of the original characters making any sort of guest appearances. West introduces readers to a new heroine, 17-year old Valory Braiosa. Valory is a direct descendant of Bristal, the heroine of the first installment. The installment which first introduced readers to the immortal elicromancers and the Water which grants immortality & elicrin stones to the one who the water chooses.

Valory attends a training academy for elicromancers. Even though she is at the top of her class is almost every subject, Valory hasn’t felt any magic of her own. She's taunted, teased, and bullied non-stop by fellow students. Being surrounded by a family who has a lot of magical power, she feels a bit like she doesn’t fit in. After all, the rest of her family is immortal and has been chosen by the water. On the day of her 17th birthday, Valory's world is turned upside down in one breathless moment. Valory follows her cousin Ivria to the water where things go horribly wrong.

After the Water seemingly vanishes after she touches it trying to save Ivria, she's accused of murdering her own cousin who she loved like a sister and destroying the water which grants immortality to the chosen. With only a few people, including King Tiernan, believing her story, Valory faces challenges from the Conclave, The Realm Alliance, and even those who are supposed to have her back. The issue is that Valory has somehow managed to return with an unknown power. A power that may either be her savior, or her damnation.

Valory soon finds out that she isn't safe anywhere and the slightest misstep or mistake has grave consequences including releasing something evil that has been hidden away for a thousand years. Valory's band of allies include an old friend (Kadri); a haughty princess (Glisette Lorenthi); a mysterious, handsome stranger (Mercery Fye) plus several Fae (Rynna & Theslyn) as they attempt to put the genie back in the bottle. Valory must learn to harness her impressive new powers and fight back against an evil who appears to have no weaknesses.

Valory's character growth is rather impressive. She goes from a girl who wishes she could have magic, to a girl who is given the most powerful magic in the entire world. The magic makes her a force to be reckoned with, and the ability to standing up to villains and even her own family. She isn't perfect, and I am absolutely Ok with that fact. She struggles along the way, but she has belief that she can save those she loves with a little luck, and some good friends who have her back. The story doesn't lack for action. It is well paced, and the ending was absolutely the best part of this entire book.