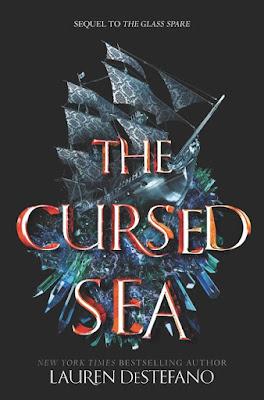 
The exciting and gorgeously told sequel to The Glass Spare, about a cursed princess who must return to the home she left behind in order to discover the origin of her curse and end a dangerous war—from the bestselling author of the Chemical Garden series, Lauren DeStefano.

With Loom’s life on the line, Wil, the exiled princess of Northern Arrod, must do what she never thought possible: return home to discover the origins of her own curse.

But home is very different from how she left it—Wil’s unpredictable elder brother Baren is now king, leading a war against the Southern Isles. And with time running out, Wil must navigate the dangerous secrets within her family to find the truth.

Nothing goes as planned, and suddenly Wil and her allies are fighting for their lives as the Southern king is out to ensure neither of his children will survive to take the throne. Traveling across cursed seas and treacherous kingdoms, Wil and Loom must make peace with their pasts if they hope to secure the future of their kingdoms.
But when their plans lead them right back to evil marveler Pahn, and to Baren—who is more dangerous than ever—can Wil and her friends outsmart their enemies, this time for good?

The Cursed Sea is the second installment in author Lauren DeStefano's Glass Spare duology. The Glass Spare ended on a surprising cliffhanger, leaving many characters in danger. Now Wilhemina (Wil) Heidle, the exiled princess of Northern Arrod, must return to her homeland—and to the family that thinks she’s dead—and uncover the origins of her curse. But, with her unstable brother Baren, now the King, Wil's attempts at uncovering deep dark family secrets might be even more precarious than previously thought.

Wil is the only daughter of the former king of the world’s wealthiest nation. She grew up in the shadows behind her brothers Owen, Baren, and the marvelous alchemist Gerdie who is perhaps the only one outside of her mother that doesn't want to see her dead. Kept hidden from the world in order to serve as a spy for her father—whose obsession with building his empire caused a war with the Southern Isles.

Wil wanted nothing more than to explore the world beyond her kingdom, if only her father would have given her the chance. Then an accident shed the light on the fact that she is cursed. Wil's touch can turn people into gemstones. Finding the key to her redemption put her in the path of a cursed prince named Loom who has his own ideas for what to do with her power. Loom demanded Wil's help and in return says he will help her find the man who can answer her questions.

Unfortunately, Pahn, a marveler, is as dangerous as they come and had conditions that needed to be met before he helped anyone. This is where the story picks up. Wil is now on her way home. The story though, isn't just about Wil. It is also about Loom, the boy she has fallen in love with. The boy who is also cursed from returning to his home and picking up the reigns of the Southern Isles. Then there is Loom's sister Espel, and her marveler bodyguard Masalee who could have been the very essences of villains, but ended up on the same page thanks to actions by her own father in putting all his focus on one girl, Wil.

The sequel raises the stakes, uncovering even more shocking secrets about the curse that has been laid on the shoulders of the youngest daughter of the House of Heidle. With a blend of updated technology and a medieval feel, the author has created a rare fantasy world that is not only dynamic and exciting, but full of treacherous kings and queens. It is completely and utterly unique and perfect for fans of Leigh Bardugo and Renée Ahdieh.

From Wil’s complicated relationships with her brothers to Loom’s relationship with his dangerous and ruthless sister, Espel, and their terrifying father—the Glass Spare series explores compelling and emotional family dynamics. I loved Zay and her child but felt Zay could have been used more. I loved that Wil is such a curious character who loves to wander and has no desire of becoming Queen of any Kingdom. Her relationship with Gerdie is awesome.

I had some issues with this book. I agree with others that the ending felt like it was rushed. Was there some sort of deadline that was missed that the author felt the need to wrap up the story quickly? I would have loved to learn more about Wil's curse and whether or not it comes back. I want to know what happened to Baren when all is said and done. I don't actually like self loathing characters who blame everything on themselves when fate, not her own actions, were to blame for what happened.