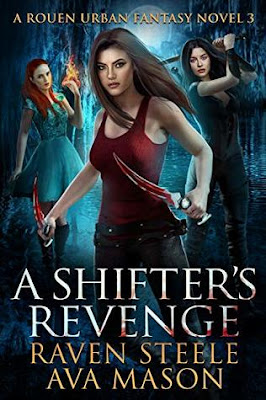 "Never kick me when I'm down, because when I get back up ... you're screwed."

Briar should be living the easy life. She finally checked off the last name on her kill list. The new pack Alpha isn't an a-hole, and her smoking hot shifter boyfriend is finally ready to spelunk her bat-cave.

But she should've remembered that life hates her. An unknown evil force is kidnapping people to create an army of drug-induced, soldier-like supernaturals. If that wasn't bad enough, the Abydos, the ancient blood Briar has vowed to protect, has been discovered. Briar must risk moving it before the growing evil in Rouen gets their hands on it.

Just when she thinks she's safe, Briar learns of a deep betrayal by someone close to her that threatens not only her pack, but the entire city. She can't fight against it as she is. She must become more, become greater. If she can't accept her destiny and fully embrace the shifter she was meant to be, then history will repeat itself, and she'll lose her pack and everyone she cares about.

A Shifter's Revenge is the third installment in co-authors Raven Steele & Ava Mason's Rouen Chronicles. This story is a continuation of A Shifter's Curse and A Shifter's Rage. It has been four days since Briar, aka Isabella Moretti, removed a one of the last key players responsible for the murder of her entire pack, her family, while leaving her for dead. Briar, we learned in the previous novel, is also a powerful shifter known as the Komira. But, if you thought Briar's life was going to get any easier now that she's crossed names off her list, you are in for a huge surprise.

With the killing of the previous Alpha, Briar has caught the attention of various principals like the Ministry aka Principes Noctis, who believe they should rule the world. Briar is told she has to fill the position within 48 hours, but who does she want to put in harms way? Briar also learns that there are a whole lot of people interested in the Abydos blood, including Samira & Angel, that Briar's family swore to protect for fear of it falling into the wrong hands. It that weren't enough, the authors decide that a being called Trianus should be mentioned.

This is the book I've been waiting for. No, not because of all the twists, and the betrayals, and the twisted love triangle that apparently is not going to be resolved, or the bizarre Hyde's that seem to be indestructible, but, because of Lynx Morgan. Lynx has been kept mostly in the background thanks to her mother, Cassandra. We know that she comes from a powerful witch family. In fact, we've met 3 of her cousins who have been attached one way or the other to the Silver Claws pack

But, when things get really going, Lynx joins with Briar, and Samira Chevoky, as well as those that Briar can trust, as she has to once again deal with powerful entities that want to force Briar to join with them voluntarily or by force if necessary. Readers of this series know that Briar is a bad-ass. We now know a bit more about Samira as well. She's the bearer of the kiss of eternal night, leader of the norther realm, and once had a relationship with Mateo. But, Lynx is able to finally come out of her shadow with an impressive display of power.

I loved the friendship that has developed between Briar, Samira, and Lynx. I loved that Roma once again gets to play with the big dogs. I really want to learn who Roma really is, and the reason she seems to be outside of other witches cliches. I don't know about anyone else, but I actually like Angel. He really loves Briar even though she has her heart set on Luke. Angel isn't going anywhere, any time soon I don't think.

So, here's the deal. I've seen almost everyone rate this book with 5 stars. Sorry, I can't overlook the silly editing errors throughout this book. This is not an advanced copy. It is a finished copy that went on sale 01/15/2019. Therefore, an editor should have caught the glaring errors. Example: The story is talking about one character in particular, but they ended up using the wrong name. This could have been found easily enough.

This is the end of Briar's trilogy. The next three books are supposed to be from the point of view of Samira, and I am ok with that since the Epilogue pretty much seems to indicate that a new villain is eager to play with Samira and see who stands when all is said and done. The Samira/Mateo angle should definitely be revealing since they have some sort of background from centuries ago.