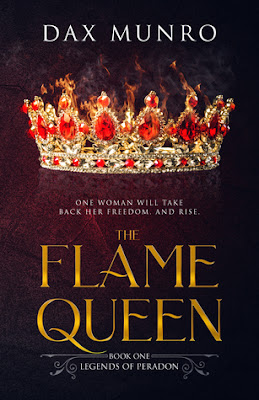 One woman will take back her freedom. And rise.

Violetta will never forget that day. Guilt shadows her every step as she prepares to take her father’s throne. Sadly, he has other ideas. Violetta must marry or forfeit her royal birthright, but all she wants is to be free, to no longer relive the tragic events of her past. If only she can learn to love again, to put the past behind her and begin anew.

Enter Emperor Ryore Frost. Handsome. Swave. And her sworn enemy.
As Violetta feels new emotions stirring within, she finds herself inexplicably drawn to this mysterious man. Could she risk marrying her mortal enemy if it meant a chance at securing her freedom?

One love-starved Emperor. And a trio of assassins, lying in wait.

The Flame Queen is the first installment in author Dax Munro's The Legends of Peradon series. Welcome to Peradon. A collection of 4 separate Realms (Spring, Autumn, Summer, and Winter) representing the 4 elementals (Earth, Air, Flame, Frost). The story revolves around two key players: Prince Ryore, and Princess Violetta. The story actually beings in the Frost Realm of Emperor Jugan.

Jugan adores his youngest son Fadius while loathing the very existence of his oldest son and heir Ryore. Jugan's reasoning is that a seer named Reiza has told him that Ryore will marry the youngest daughter of the Kingdom of Flame and become Emperor. He puts into motions to have both of them killed. Ryore was considered to be weak, and presumably would make an awful king. For Jugan, this could not stand. Violetta's only crime was being the prophesied woman.

For Violetta Flame, she has no clue as to what is about to happen to her, and her family until she somehow manages to survive an assassination attempt which takes away her mother and her brother Darius, the apparent heir. Violetta has never been eager to rise to the status of heir. But, with the death of her brother, she is now thrust into the spotlight. She is much more free wheeling and interesting in seeing other places. What's even more twisted, is that Violetta has feelings for Xyhoni, the heir of the Earth Kingdom.

And, if that weren't enough to have you scratching your head, it appears as though Ryore has been secretly keeping track of Violetta for years because of her beauty and apparent intelligence. One could call him a creeper who is totally obsessed with the young woman who is now heir to the Flame Realm, and will soon be expected to marry. But, Ryore apparently has some underlying goals of unifying the two kingdoms which includes Violetta.

Meanwhile, Reiza, Fadius and another character called Arlas, a stealthy assassin, have concocted plans that will remove both Violetta and Ryore and install Fadius as the new Frost Emperor. Caught in a bizarre world as the new Empress, Violetta's life spirals out of control. Every step she takes, seems to take her further and further away from who she really is. But, it does awaken some impressive new powers to keep her safe from those who want to harm her.

Apparently, this was originally called The Phoenix under a different author name Daccari Buchelli. This is a fantasy coming-of-age novel, where the main character goes through a lot of trials and tribulations, including some evil forces, before gaining understanding about herself and the world around her. Including her own strength and her own rather spectacular powers.