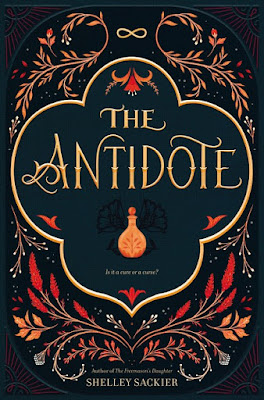 In the world of healers, there is no room for magic.

There is only knowledge—precious wisdom, painstaking accounts of herbal remedies, and long-practiced techniques handed down from healer to apprentice since the beginning of time. Fee knows this, just as certainly as she knows that her magic must be kept secret.

But the crown prince Xavi, Fee’s best friend and only source of comfort, is sick. So sick, and so frustratingly incurable, that Fee can barely contain the magic lying dormant inside her. She could use it, just a little, to heal him. But magic comes at a deadly cost—and attracts those who would seek to snuff it out forever.

A wisp of a spell later, Fee is caught in a whirl of secret motivations and dark pasts, where no one is who—or what—they appear to be. And saving her best friend means delving deeper into the lush and treacherous world whose call she’s long resisted—and uncovering a secret that will change everything.

Fans of Joelle Charbonneau’s Dividing Eden series will love the lavish, twisted setting that pulls the reader into an age-old struggle between magic and science.

The Antidote, by author Shelley Sackier, is a rarity in the young adult fantasy genre. It is a full developed story line with a beginning, a middle, and an ending that precludes the need for any sequel. This is a story about Ophelia, or Fee as her friends like to call her. Her friends meaning Prince Xavi of Fireli, and his brother Prince Rye. This is a story that is set in a land known as Aethusa. It is a land that is separated into 4 Kingdoms.

But, it is Fireli where much of the story takes place. Fee, Xavi and Rye spent their childhood together. They nearly inseparable. Xavi was destined to become king and Rye is destined to marry Fee, who is training to become a healer under a woman called Savva seems to have had an affinity for magic which is illegal. But 10 years ago, a mysterious illness struck Fireli killing half of the population. In a curious move, the unaffected where split up and sent to the other three Kingdoms. Rye was sent to Gwyndom while Xavi and Fee were left behind.

For 10 years, Fireli has remained under quarantined. The country has been devastated due to the fact that no goods can be traded with other kingdoms. The survivors are mandated to take a daily remedy to keep them from getting sick. There are even rules. “Fireli’s Three Seclusion Rules: You must never leave the castle grounds of Fireli, or the confines of your hamlet if you live outside the castle. You must never use more than the barest of Fireli’s meager resources. You must always take your antidote.”

This is where Fee comes in. As she works with Savva to keep the people of Fireli healthy, she becomes more curious as to the strange birthmark on her wrist, and the apparent way that her best friend continues to get sicker which puts his ascension to the crown in danger. She also seems to have access to magic which has been made illegal in all four of the kingdoms. However, 10 years has now passed, and the quarantine is about to be lifted.

For the first time in 10 years, Fee, Xavi, and Rye will be reunited while also expecting a visit from Princess Quinn, Xavi's betrothed from the Kingdom of Gwyndom. Things come to a head with the arrival of Quinn. With her arrival, Xavi actually gets sicker to the point where the story becomes almost a murder/mystery. What is really happening to Xavi? Does Quinn have anything to do with Xavi's sickness?

What's even worse is that Rye truly believes that Fee has had a hand in Xavi's situation and turns his back on her completely for Quinn who he has spent years with. Fee ends up with still puzzled Rye traveling to Gwyndom where she hopes to find answers. The story that takes place in Gwyndom is very telling. Readers get to know other magical users who have been hiding for fear of being killed. She will also find answers to her own genealogy which really made things interesting.

In a market saturated with dark, epic YA fantasy series, The Antidote stands out as a lighter, more accessible story of magic, romance, and friendship. Fee’s attachment to two princes is subtle but loaded, and the life-or-death stakes of the story push all three into a gripping romantic conclusion.