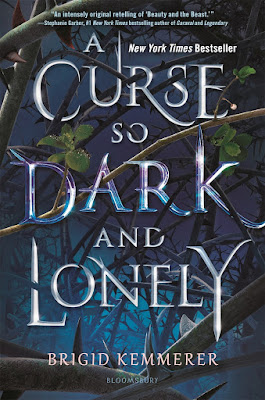 This lush retelling of Beauty and the Beast features a kingdom in peril and a heart-stopping romance—perfect for fans of Marissa Meyer.

Prince Rhen is cursed. He spurned the wrong woman and is now forced to repeat the autumn of his eighteenth year until he can convince another to love him. His fate would be bearable, but at the end of every season, he transforms into a dangerous monster. After his subjects learned to fear the castle on the hill, Rhen sent Grey, the last member of his guard, to find young women in other worlds.

Harper is cursed by reality. Her father left and her mother is losing her fight with cancer. When Harper sees Grey abducting a woman from the streets of D.C., she intervenes, only to get sucked into Rhen’s world. Now, Harper is trapped. But when Harper proves to be more than just another girl to charm, Rhen realizes he can do more than break the curse . . . he can save his kingdom once and for all.

A Curse So Dark and Lonely is Brigid Kemmerer retelling of Beauty and the Beast. For over 300 seasons, Prince Rhen of Emberfall has been cursed to turn into a shape shifting monster that kills everything in his path. The only way to break the curse is to find true love. For each of these seasons, his royal guard Grey, is the only one able to cross into our world to bring back one woman who may be able to provide true love and break the curse.

Rhen's curse forces him to keep repeating the autumn of his 18th birthday until he can get one of the women his commander kidnaps to fall in love with him. Rhen is growing desperate. His family is gone, his guards and his army is gone, and his people are falling into poverty and disrepair. He's being tormented at every turn by the woman he scorned leading to Rhen being cursed. He is losing hope.

Meanwhile in DC, Harper’s brother Jacob is the enforcer for a local loan shark, as a way to pay off their father’s debts and protect their terminally ill mother. While he tries to protect her, Harper helps in anyway she can. When keeping lookout on his latest job, Harper sees a man attempting to kidnap a woman. Harper leaps into action with a trusty crowbar, but finds that she is kidnapped instead. Harper, who is afflicted with cerebral palsy, is transported to Rhen’s alternate world, where she may be his last chance at love.

However, she is not interested in a guy who kidnapped her or the Captain of the Guard who took her away from home. As Harper continues to try to run away and get back home, even though Rhen is powerless to return her, she begins building friendships with the people of this new world. In Emberfall, Harper becomes a princess from Disi, who tries to help Rhen's people in their time of need. Will Harper and Rhen be able to find love in each other and end the curse?

Harper is stubborn, hot-headed and wonderfully courageous; her flaws make her a very real protagonist that you can root for and fully understood, even when you disagree. Harper never once complains about her CP. In fact, I can say that it makes her more genuine. As a reader, I understand that Rhen was under a curse. I understood that his curse was causing him to change into a beast and kill innocent people.

But, when the time actually came to meet said beast, the story was nearly over. I really liked Grey. I liked his relationship with Harper, and his protectiveness of Rhen even when Rhen needed a good kick in the ass. With the way this book ends, there is hope that the next book in the series, A Heart S Fierce and Broken, will feature Grey. I hope it's Grey and not Harper's brother Jacob who took a lot of time for me to warm up to.