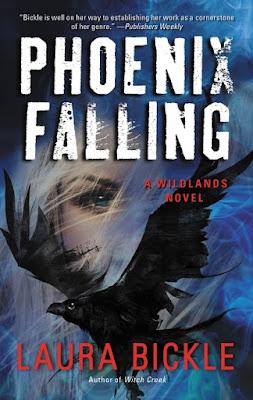 In the Yellowstone back-country, a merciless source of evil carries a torch for the past…

Petra Dee and her immortal husband Gabe have been trying to gain a toehold in what passes for ordinary life in Temperance, Wyoming—a wickedly enchanted land founded generations ago by the alchemist, Lascaris. Petra may be adept when it comes to the uncanny, but as a reasoned geologist, Petra still can’t fathom the wildfires suddenly engulfing Yellowstone National Park, or why Gabe claims to have seen the sky explode in flames. The answers could lie in the past.

It was a dreadful night in 1862 when Lascaris went harvesting for souls, only to be set upon by townsfolk determined to eliminate the root of all evil in a trial by fire. Petra can’t help fearing that Lascaris has crawled out of the ashes of history to wreak vengeance—and to complete his mission by claiming every vulnerable soul in Temperance.

With the help of Gabe and her coyote sidekick, Sig, Petra must now venture into Lascaris’s shadow before he turns her world into an inferno burning out of control.

Phoenix Falling is the Fifth and final installment in author Laura Bickle's Wildlands series. Set in Temperance, Wyoming, Phoenix Falling provides a satisfying ending for the Wildlands books, wrapping up a 5-book story that work both as stand-alone adventures and cohesive whole. This is a book that alternates narratives between several key characters from Petra, to Nine, to Gabriel, to Owen. Each struggles mightily in this story.

Each rises like the heroes they are to keep their little town from being removed from the map forever. It will take a remarkable series of events for everyone to walk out alive. It is includes an ending that is emotional not only in its scope and depth. The series started by introducing Geologist Petra Dee who arrived in Temperance with hope of finding her lost father who she hadn't seen since she was 16. Petra discovered a town that was founded by a destructive alchemist named Lascaris who disappeared in the 19th century.

She also discovered an entirely new world with the help from Gabriel, a former Hanged Man who is now her husband, Maria Yellowrose, her best friend and confidant, Sig, a curious devil of a Coyote who is Petra's familiar, Mike Holland, a Park Ranger who has no clue as to what is happening in the supernatural world, Nine, a former wolf who is now a human, and Sheriff Owen Rutherford, a man who has been followed around by a ghost named Anna.

Petra has met her share of creepy and the unusual since moving to Temperance. Petra's own body is a map of all the troubles she's seen since arriving in Temperance. She's watched a lover die in flames, she faced a drug lord, a Basilisk, and her current lover Gabriel, a former hanged man, became mortal again after 100 plus years of being attached to the Lunaria, or Tree of Life, only to revert to being an immortal being.

If you've read the fourth installment, you know that she fought cancer and was given a remarkable present. A present that has her questioning whether she is truly human or something else. As this story begins, Yellowstone and the surrounding area is on fire. With worries that the volcano under Yellowstone may be ready to erupt, thus eliminating all life on earth as we know it, Petra and her friends must try to uncover what is really going on.

Petra via Gabe and her own encounter, learns about the Phoenix and how destructive this being really is. But, the newest villains in this story will give Petra and her friends more than they can handle. From the return of a powerful alchemist with desires of immortality if he can only catch the mythical Phoenix, and a large frog name Pigin who is the God of Death.

Meanwhile, Owen, who has had enough of Gabe and Petra for one lifetime, is fighting to uncover a 20 year mystery of a girl name Anna. Owen got his first-hand ride into the abyss, and what he discovered has scared him for the rest of his life. How can you look into the dark, and not have the darkness look back & swallow you whole? His story leads to some interesting decisions which I won't spoil. I am one to admit that Owen really surprised me in this story.

I am also adult to admit that his story was a bit on the emotional side as was the ending to this series. If you haven't read this series yet, don't get fooled by the covers. This is not a paranormal western. This is a paranormal series set to the back drop of a small western town in Wyoming that has seen its fair share of ups and downs. It is filled with characters who you will come to love, and characters you will hate. Petra's life has changed in many different ways. She's not gullible. She's not afraid of taking chances. But, life somehow always finds a way to throw up road blocks even at the most curious of times.