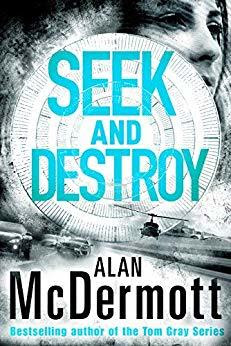 
She got away once. They can’t let it happen again.

Eva Driscoll is on the run. She has a new identity, and the best part of $20m liberated from the CIA. Henry Langton is dead but his sinister allies are circling, and not even a presidential pardon can help Eva against an organization that operates above the White House.

With agents around the globe and no tactic off limits, Langton’s men are calling the shots. When they track down ex-CIA computer expert Farooq Naser and threaten Andrew Harvey and Tom Gray, Eva knows they will come for her next. She needs to run—and fast—but what chance does one woman have against the most powerful group in the United States, with just a few ex-spooks and a couple of mercenaries on her side?

But her pursuers should know that, even backed into a corner, Eva Driscoll is not the kind of prey to give up without a fight. But will it mean hurting those she cares for the most?

Seek and Destroy is the second installment in author Alan McDermott's Eva Driscoll series. Months after the events of Run and Hide, Eva Driscoll and her team (Farooq, Sonny, Len Smart, Carl Huff, and Rees Colback) are living under the radar with new ID's since being pardoned by the American President. But, things are about to get very dangerous for everyone. Henry Langdon, the dark, shady man behind most of the governments of the world, and who was presumed to be dead by almost everyone, is very much alive and itching for payback.

He especially hates Eva, the former CIA operative who brought the richest man in the world down. When Farooq, Eva’s IT maestro, is tracked down in India, his friend is murdered by the Langdon's people in order to force Eva and the others out into the open. When that fails, Langdon's people target retired mercenary Tom Gray, and then his friend, MI5 agent Andrew Harvey, kidnapping their daughters in order to get them to give Eva up. I have to be fair with my review.

This is more of a Tom Gray story than one that belongs under the heading of Eva Driscoll's. Tom, Sonny, and Len have a history. So, when Tom and his daughter are targeted and things don't go as expected, it will take an act of God to stop him from doing what's needed into order to bring down Langdon and his entire organization. Even though Eva proved herself to Sonny and Len, with his daughters life on the line, it is Tom who proves the much necessary leadership.

From India, to England, to Italy, to a secretive island in the Pacific, Tom, Eva and their team must infiltrate Langdon's highly protected base of operations and rescue two little girls from finding pain and suffering. It is fair to say that one must suspend disbelief at times while reading this story. The story is fast paced, and takes large jumps from one locale to the other. The author really uses Tom Gray, maybe as a farewell, in order to show that even when he's supposed to be retired, you can't mess with him, or his family without paying a steep price. I would also encourage readers to please read Run and Hide so that you understand what has happened to Eva and her crew that has sent them on a virtual war against a man who knows where all the bodies are buried because he ordered their removal.