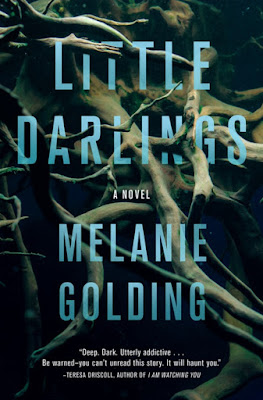 Everyone says Lauren Tranter is exhausted, that she needs rest. And they’re right; with newborn twins, Morgan and Riley, she’s never been more tired in her life. But she knows what she saw: that night, in her hospital room, a woman tried to take her babies and replace them with her own…creatures. Yet when the police arrived, they saw no one. Everyone, from her doctor to her husband, thinks she’s imagining things.

A month passes. And one bright summer morning, the babies disappear from Lauren’s side in a park. But when they’re found, something is different about them. The infants look like Morgan and Riley—to everyone else. But to Lauren, something is off. As everyone around her celebrates their return, Lauren begins to scream, These are not my babies.

Determined to bring her true infant sons home, Lauren will risk the unthinkable. But if she’s wrong about what she saw…she’ll be making the biggest mistake of her life.

Compulsive, creepy, and inspired by some of our darkest fairy tales, Little Darlings will have you checking—and rechecking—your own little ones. Just to be sure. Just to be safe.

Set in present-day England, and spanning the first five weeks following a traumatic childbirth, Lauren Tranter’s hopes and dreams of being a new mom are shattered when she encounters a mother’s worst nightmare—someone is threatening to take her twins if she leaves them alone. The novel ranges from the stark loneliness of returning home after birth to the confines of a psychiatric unit, as the reader is forced to question if Lauren is mad, or does she know something we don’t?

"Changeling- a child believed to have been secretly substituted by fairies for the parents' real child in infancy."

The story starts towards the end of Lauren's long labor which heralds the arrival of twin babies Morgan and Riley. Lauren spends several days in the hospital with them, wondering when her "love" for her babies will appear. Lauren is exhausted, inexperienced, and gets no real support from her husband Patrick, at any time in the story. I dare say that Patrick turns out to be a right awful prick who for even one moment in time had he took the time to actually understand what his wife was experiencing, perhaps the events that happened would have not transpired.

This story actually follows two distinct characters: Lauren Tranter, and Detective Sergeant Joanna Harper. It is Harper who we not only meet in the beginning of the book, but follow to the end of the book as she tries to piece together what is really happening to Lauren, and whether or not she experiences a phenomenon called puerperal psychosis or if there is something supernatural at play here. How else would you explain the behavior of Lauren from the moment she gives birth to twins Riley and Morgan, and later believes that someone is attempting to steal her babies and replace them with changelings?

Terrified for her babies, Lauren spends her days locked away in the house with them, until her increasingly annoyed and utterly useless husband insists that she take them out for some fresh air. That day as poor sleep deprived Lauren dozed off for a minute, someone snatched her babies. Lauren no longer her babies but someone else's. Someone else who has been stalking her since Lauren overheard her singing to her own twins in the recovery room and demanded that they switch babies.

As someone who has never, to my shame, had children, it is hard for me to understand what postpartum depression really is and how it affects the life of a new mother. In several ways, this book is rather disturbing. It also becomes a mystery or sorts to puzzle out the facts from the paranormal. Plus, the ending is rather strange in that it really doesn't the question as to whether or not Lauren experienced what she did, or was a psychosis?