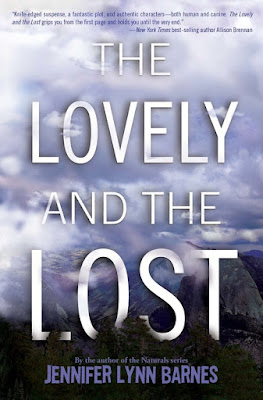 
Kira Bennett's earliest memories are of living alone and wild in the woods. She has no idea how long she was on her own or what she had to do to survive, but she remembers the moment that Cady Bennett and one of her search-and-rescue dogs found her. Adopted into the Bennett family, Kira still struggles with human interaction years later, but she excels at the family business: search-and-rescue. Together with Cady's son, Jude, and their neighbor, Free, Kira works alongside Cady to train the world's most elite search-and-rescue dogs. Someday, all three teenagers hope to put their skills to use, finding the lost and bringing them home.

But when Cady's estranged father, the enigmatic Bales Bennett, tracks his daughter down and asks for her help in locating a missing child-one of several visitors who has disappeared in the Sierra Glades National Park in the past twelve months-the teens find themselves on the frontlines sooner than they could have ever expected. As the search through 750,000 acres of unbridled wilderness intensifies, Kira becomes obsessed with finding the missing child. She knows all too well what it's like to be lost in the wilderness, fighting for survival, alone.

But this case isn't simple. There is more afoot than a single, missing girl, and Kira's memories threaten to overwhelm her at every turn. As the danger mounts and long-held family secrets come to light, Kira is forced to question everything she thought she knew about her adopted family, her true nature, and her past.

The story follows the Bennett family Cadence (Cady), one of the best search and rescue dog trainers in the country, her son Jude, her adopted daughter Kira, who she found in the woods 11 years ago, and Phoebe (Free) Morrow who has inserted herself into the family dynamics and refuses to be left behind when the family is asked by Cady's father Bales, to help search for a missing girl who disappeared in Sierra Glades National Park. With its lush mountain setting, pulse-pounding intrigue, cast of unique characters -including a troop of rescue dogs-this book makes a great pitch for television and film.

Blending the high stakes action of a police procedural with the majestic thrills of a heart-pounding survival story, The Lovely and the Lost explores what it means to be lost and the power of family to bring us home. Barnes has thought out every intricate detail of these characters' backstories, from Kira's time as a feral little girl in the woods who is still trying to fit the pieces as to what really happened to her, to the geneses of Free's independent attitude to Cady's contentious relationship with her father, to the mystery surrounding the town bad boy, Gabriel.

Readers will love discovering how this cobbled together group of misfits became a loving family unit. The story is filled with adorable dogs with their own unique personalities and their own roles in the action of the story, adding another intriguing layer to the narrative and making this a perfect read for dog-lovers everywhere. If you are a fan of search and rescue stories with dogs, you will enjoy this book.

For the record, I didn't hate this story even though my rating isn't 4 stars or higher. In fact, I love stories about Search and Rescue and the way the dogs are trained to search out anyone from missing and lost people, to cadavers. I loved Kira's relationship with both Saskia and Silver. My issue was the use of Foster Mother over and over and over and over again even though Kira has been with Cady for 11 years. Was there no attempt made by the Cady to adopt Kira, or was this a mistake by the author? Also, the ending leaves a huge question about what happened to Kira when she was abandoned. I'd like that cleared up but it's unlikely to happen.

He laid his hand on my shoulder, a warm and steady weight. Familiar. Home. And just like that, I was five years old again and six and seven, and Jude was the one person in this world that I trusted. Back then, I wouldn’t have stared down the bullies. Back then, I would have attacked.

“And on that note,” Free said, stepping forward, “let’s break this little lovefest up.”