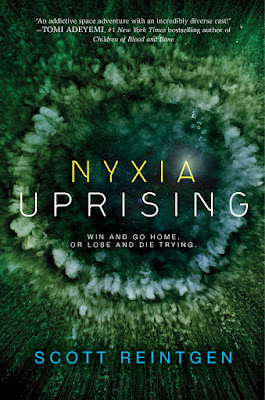 In the highly anticipated Nyxia Triad series finale, Emmett and the Genesis team must join forces with a surprising set of allies if they’re ever to make it home alive.

Desperate to return home to Earth and claim the reward Babel promised, Emmett and the Genesis team join forces with the Imago. Babel’s initial attack left their home city in ruins, but that was just part of the Imago’s plan. They knew one thing Babel didn’t. This world is coming to an end.

Eden’s two moons are on a collision course no one can prevent. After building eight secret launch stations, the Imago hoped to lure Babel down to their doomed planet as they left it behind. A perfect plan until the Genesis team’s escape route was destroyed.

Now the group must split up to survive the hostile terrain and reach another launch station. As both sides struggle for the upper hand, the fight leads inevitably back into space, where Emmett, his crewmates, and their new allies will fight one final battle for control of the Genesis ships. Win this time, and they’ll survive Babel’s twisted game once and for all. As the Imago world falls, this is the last chance to rise.

Nyxia Uprising is the third and final installment in author Scott Reintgen's The Nyxia Triad. Things you should know: The story takes place right where Nyxia Unleashed finished. This isn't just Emmett Atwater's story this time out. The author actually uses several other key characters like Longwei Yu, Morning Rodriquez, & Anton Stepanov to tell what is happening in various other places on the planet of Magnia. Yes, I would recommend that you read the books as they were released so that you don't get confused as to whom you are supposed to be rooting for.

But, if you haven't read the first two books, all four of these characters are members of Genesis 11 or 12 which came from Earth to settle and mine for Nyxia for the Babel Corporation which has made claims that the survivors will be millionaire's once they return home. Each one of these characters comes from a background that doesn't offer much of any hope on Earth. Emmett and his teammates have discovered many of Babel's secrets along the which has set them on a course directly against Babel, especially DeFoe, the so called King of Babel.

Welp, let's just say from the first part of the book until the breath taking ending, this is an interesting ride. The story takes place not only on the planet, but also on Tower Space Station orbitting the planet as the struggle against Babel continues. The story is filled with action, suspense, a bit of romance, and enough diversity to keep even the most stringent hard ass diversity harpy happy. Emmett and his friends have made allies of the people known as the Imago. They even fought alongside them after Babel attacked the Imago.

But Babel has no clue what is about to happen. The Imago know that the moons are on a collision source and they need to get off Magnia quickly. If they can help the Genesis crew return home to Earth, they hope they will be welcomed as well. One of the sub plots of this story happens between Emmett and Morning. Working together against Babel brings Emmett and Morning together at last. Emmett’s recognition of Morning’s superior skills and smarts is fresh and appealing. One could say that Emmett knew when to shut up and let Morning take charge when things are the most dangerous.

Overall, I definitely feel satisfied by the ending even though there was more death than I was expecting. The death scenes were probably the hardest for me to read but also a truth that even young men and women are not indestructible when it comes to dying in order to save your friends, and fight for a cause that was thrust upon you by a greedy and unsavory corporation who has made trillions off your hard work.

For a moment, I think I’ve lost the trail. But I double back and find his blood painted across moonlit leaves. A great streak of scarlet marks the body of a swollen trunk. If I squinted any longer, I might have been able to convince myself the mark looked like the Chinese characters for dying.

I need this king alive.

Moonlight dominates the clearing. A creek angles west. It forks, and just there, I see where Defoe must have gone. There are no footprints, not in this ghostly place, but it’s the most reasonable decision. A massive tree has been exposed at the roots. They curl above and around a hollow. It’s the kind of burrow a deer might sleep in. I watch the shadows for several minutes.

I follow the creek forward. The trees sway, their branches and leaves grasping at the light of the nearest moon. It almost feels as if the entire forest is flinching away from where Defoe is hidden. Fifty meters. I lift both hands innocently into the air. My eyes trace over the landscape, through the shadows. I’m not eager to die just because some creature has picked up our scent.

Twenty-five meters. I pause, hands still raised, awaiting an invitation. The shadows are too deep to see anything. Breathing. I can hear breathing. One shallow breath after another.

Reaching up, I tap the light on my shoulder. A beam flashes out—like a third moon—and highlights the makeshift cavern. Defoe is there. His eyes take in the sight of me before closing in pain. I can feel him grasping, the subtle trace of nyxia in the air. Clearly, he’s far too weak to do much with the substance. I have a choice to make. The consequences will echo.

The first choice ends here and now. How painfully simple it would be to finish him. One of Babel’s greatest threats, erased. It would eliminate any opportunity for him to hurt the others.

It would also eliminate any opportunity to infiltrate Babel. Show up on their doorstep without him and I become a prisoner. The other choice: Save him. Rescue. Subvert. Wait.

When I strike, I want to make sure I hit an artery. My two choices and their consequences play out in less than a breath. “Mr. Defoe.” I make my voice calm. “I came to help you.”

He wheezes. It’s almost a laugh. It is clear what he thinks of me.

I watch as he leans his head back. Hidden at his hip, an explosive. Identical to the one he used on the battlefield. The same device that nearly ripped my friends apart with a single blast. Defoe lifts the device so I can see it more clearly.

“I thought—well, never mind what I thought.” A cough shakes his body. “Take this. Replace my fingers on the pin and get rid of it. Three-second charge. Throw it as far as you can.”

His arm shakes, but I am steady. I replace his fingers quickly, device secured, and turn. Twenty paces bring me back to the edge of the creek. With a deep breath, I throw the grenade as far as I can. Moonlight dances across its spiraling surface; then the grenade falls below the tree line and vanishes briefly from sight. A second passes before an explosion tears the darkness in two.

Bright and loud. A pair of birds take to the air. Something massive stirs deeper in the forest. I move back to Defoe’s side. “I can’t—stop the bleeding,” he gasps. “The nyxia won’t take.”

I kneel so that my shoulder light is centered on the curled, covered stump of his arm. He has a soiled towel wrapped around it. Ineffective. I set down my own pack and start digging.

“I need to unwrap your current bandage.”

Defoe nods once. I pinch the gauze between two fingers, carefully avoiding the blood, and lift one corner. The folds unravel. Defoe doesn’t protest as the material rips and snags. The wound exposes the bloody interior of his arm. Babel’s king. How human he seems now. For too long I thought him a god. Seeing him this way will help in all that is to come.

I pack the gauze in tight around the exposed areas before wrapping the bandage tightly. Layer after layer. I use a piece of nyxia to seal it to his arm. Defoe lets out a groan as I pull the plastic bag over the entire wrapping, cinching it on his forearm, closing everything within.

“It needs a lot more than ice,” he replies. “I haven’t slept. I’ve forced myself to keep moving. I need you to seal us in here. Keep us safe. Do you know how to do the manipulation?”

In answer, I reach for my nyxia. The substance pulses. A firm thought casts it out like a curtain, big enough to drape over the entrance of the hollow. “Like this?”

“Adjust it,” Defoe gasps back. “So we can see out, but nothing can see in.”

The change takes a few attempts. Defoe worms his way deeper into the hollow so there’s room for me. I reach up, tucking the top of the nyxian drape between a set of exposed roots. I test it with a tug and it holds. The fabric stretches as I adjust the flaps and enclose us. There are gaps to let oxygen in, but we’re hidden from prying eyes now. Defoe turns his back to me, injured arm balanced delicately on his hip.

For the second time, I consider killing him.

The moment slips by like a long, slithering snake. Understanding shivers down my spine. I can feel the goose bumps run down my neck and arms. I know what keeping him alive will mean. Someone will die. A friend of mine, perhaps. Defoe is formidable. He can turn the tides in a single battle with ease. His intelligence will also give Babel the upper hand in the coming days.

Who will die because I let him live? What will the cost be?

I force myself to swallow those fears. I chase the dark thoughts away and remember that it’s wise to lose a battle if it means we can win the war.

Unbidden, my eyes roam up to the distant moons. Glacius looks like an unpolished pearl; Magness like a bloodshot eye. The two moons appear hammer-struck into the sky. It’s hard to remember they are moving, spinning, spiraling. I know their paths are drawing them inevitably toward one another. I keep the thought quiet—almost afraid Defoe might hear it if I think about it for too long. But no matter how much I try to bury it, the truth is impossible to ignore.

This world is coming to an end.