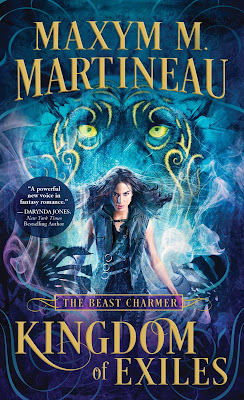 Assassin's Creed meets Fantastic Beasts and Where to Find Them in this gripping, epic fantasy romance trilogy from debut author Maxym M. Martineau.

My heart wasn't part of the deal when I bargained for my life,
But assassins so rarely keep their word.

Exiled Charmer Leena Edenfrell is running out of time. Empty pockets forced her to sell her beloved magical beasts-an offense punishable by death-and now there's a price on her head. With the realm's most talented murderer-for-hire nipping at her heels, Leena makes Noc an offer he can't refuse: powerful mythical creatures in exchange for her life.

Plagued by a curse that kills everyone he loves, Noc agrees to Leena's terms in hopes of finding a cure. Never mind that the dark magic binding the assassin's oath will eventually force him to choose between Leena's continued survival...and his own.

Kingdom of Exiles is the first installment in author Maxym Martineau's The Beast Charmer trilogy. This story revolves around two main characters: Leena Edenfrell and Noc, a Cruor Assassin who is hired to kill her. Leena is what's known as a charmer. A Charmer is a person who possesses the rare ability to summon magical beasts which is why the series is being compared to the book Fantastic Beasts. Charmers are only as strong as the beasts they keep, and Leena is one of the strongest around. Leena, who was sentenced to a lifelong exile from her former home, makes a living any way she can.

Which often means selling her beasts which is supposed to be forbidden. It's hard for Leena to sell the beasts since she has a connection to each of them and knows exactly what they offer her each time the are called. In fact, she carries a book around her neck with each beast she has in her bestiary. After meeting and defeating a Cruor assassin, Leena makes a deal that will not only save her life, but out the person who was responsible for marking her for death. She must provide four magical creatures to the Guild Master and 3 of his men in order to stay alive.

Noc is the Guild Master of the Assassin's group known as Cruor. The Cruor are undead. They raise those they can't live without which often times means loved ones or life long friends. They are not easily defeated or swayed. When an assassin takes a job, they are very successful at completing their mission. Until Leena defeats one of Noc's men and he is forced to take on Leena's bounty. The real point here is that there is magic attached to each bounty and the assassin who takes it. If the assassin fails, they forfeit their life. So, now Noc has to find a way to have Leena provide him and 3 of his men with 4 magical beasts while also uncovering the person who initiated the bounty.

Leena is a pretty decent character with a bit of bravado and vulnerability mixed in. Noc is charismatic, secretive, and brilliant. He knows how to box people in, and get the most out of them.  I really got to enjoy the secondary characters who join with Noc and Leena on their mission to collect 4 beasts. Kost is the assassin who failed to kill her, Ozias takes a keen interest in Leena right from the start and sticks by her side throughout, Calem is the flirty, wild assassin who looks for a challenge any where he can find it.

It took a bit to get into this book, but I will say that it is worth your time to take a chance with the book. The romance was pretty predictable but at least it wasn't love at first glance. I know it's a paranormal romance, therefore there will be romance involved in the story. Yep, that's for sure! I would have loved to learn more about Noc and who he really is. He is holding a key piece of the equation to who he was before he raised from the dead and became an assassin. Hopefully we will find out more when the second book comes out next year.