#Review - The Beyond by Chloe Neill #Urban #Fantasy 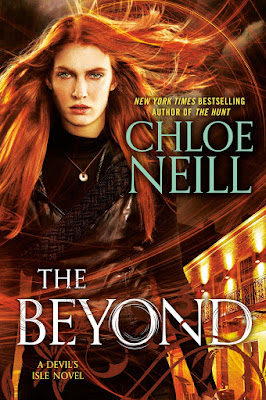 
Sensitive Claire Connolly must journey to another world in the electrifying fourth installment of Chloe Neill’s post-apocalyptic urban fantasy series.

It’s been a year since the Veil between the human world and the world Beyond was torn apart, and war began again. Sensitive Claire Connolly and bounty hunter Liam Quinn have been helping their human and paranormal allies fight back against the ravaging invaders and save what’s left of New Orleans.

But a new enemy has arisen, more powerful than any they’ve seen before, and even Devil’s Isle cannot hold her…

When Claire learns of a new magical weapon—one built by paranormals themselves—she knows it could turn the tide of war. But to reach it, she and Liam will have to cross into the Beyond itself. In a world full of hostile magic and dangerous foes, she’ll have to channel the powers she once kept hidden in order to survive. New Orleans hangs in the balance, and the storm is growing closer…

The Beyond is the fourth and final installment in author Chloe Neill's Devil Isle series. This series cross blends urban fantasy with a post-apocalyptic setting of New Orleans. 8 years ago, the Veil that separates humanity from what lies beyond was torn apart, and New Orleans was engulfed in a supernatural war. Those with paranormal powers were confined in a walled community that humans call the District. Those who live there call it Devil's Isle. Protagonist Claire Connolly kept a dangerous secret for years: she’s a Sensitive, a human endowed with magic that seeped through the Veil.

Not too long ago, Claire would have found herself confined to Devil's Isle for the rest of her life. Now, there are Sensitives who chose to step out of the shadows and into the light in order to learn how to handle their magic before it destroys them. Throughout this series, Claire and her allies, including bounty hunter Liam, his brother Gavin, best friends Gunnar & Tadji, Consurlaris/Angel Malachi, Rachel Lewis, Moses, and Burke have been tested over and over again, but still stand.

But, when a dangerous Seelie escapes from Devil's Isle and joins others of her species, New Orleans may not be able to survive the havoc that will soon reign down on them. They discover that there is only one way to defeat the enemy and it involves a journey into the beyond, which has the potential to be dangerous for many reasons. With a dangerous hurricane barreling its way directly for New Orleans, Claire and a group of her friends will have to travel to the Beyond where they hope to find a weapon to save the city.

This is the first time that Claire has left New Orleans and what she finds in the Beyond is rather puzzling. Those who live there give the saying, something is better than nothing, a new meaning. Claire has grown a lot since the first book. She's much more confident now and has better control of her abilities and it doesn't hurt that she doesn't have to look over her shoulder any more worrying about when her life will take a drastic turn. She's learnt to appreciate life, she celebrates the small things like spending time with friends and family and is very focused on protecting the people she loves.

It's fair to say that the ending of this series has me satisfied. I don't think you could write another ending without leaving a whole lot of answers.