#Review - Soul of the Sword by Julie Kagawa #YALIT #Fantasy 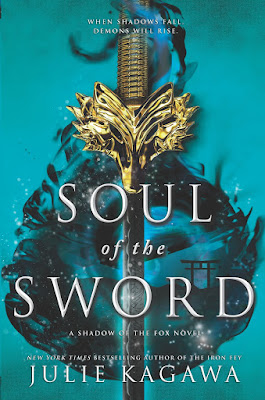 Kitsune shapeshifter Yumeko has one task: to take her piece of the ancient and powerful scroll to the Steel Feather temple in order to prevent the summoning of the Harbinger of Change, the great Kami Dragon who will grant one wish to whomever holds the Scroll of a Thousand Prayers. But she has a new enemy now. The demon Hakaimono, who for centuries was trapped in a cursed sword, has escaped and possessed the boy she thought would protect her, Kage Tatsumi of the Shadow Clan.


Hakaimono has done the unthinkable and joined forces with the Master of Demons in order to break the curse of the sword and set himself free. To overthrow the empire and cover the land in darkness, they need one thing: the Scroll of a Thousand Prayers. As the paths of Yumeko and the possessed Tatsumi cross once again, the entire empire will be thrown into chaos.

Soul of the Sword is the second installment in author Julie Kagawa's Shadow of the Fox series. Soul of the Sword picks up right where Shadow of the Fox ended. One thousand years ago, a wish was made to the Harbinger of Change and a sword of rage and lightning was forged. Kamigoroshi. The Godslayer. It had one task: to seal away the powerful demon Hakaimono. Now he has broken free and a mighty hero has been consumed by the demon.

It is now up to an unusual group of people, Yumeko, Master Jiro, Taiyo Daisuke, Reika, and Okame, to bring Yumeko's piece of the Dragon Prayer scroll piece to the Steel Feather Temple which hasn't been seen in a very long time. The book once again filters through several key characters including Hakaimono which gives the book an even great depth as well as some pretty cool action scenes, and some bizarre creatures who come out to fight again the now released demon who was caught up in a wish to the Harbinger.
Meanwhile, Yumeko has another mission. She has to find a way to save Tatsumi from being possessed by Hakaimono. After all, Tatsumi saved her life numerous times and now she feels as though she owes him. That means dealing with the Shadow Clan who sees Tatsumi as a failure and a danger that must be removed. That means finding an inner strength to believe that she can actually fight against Hakaimono and win.
Yumeko and her allies have to rush against time to prevent an even more dangerous villain from collecting all three parts of the Dragon Prayer and bringing an end to everything. It's absolutely wonderful to see Yumeko discover who she really is and what she is capable of. In the first book, she started out as an innocent who was bullied by her former Temple mates. Along the way, her world has not only expanded, but she has become comfortable taking the lead when her friends think about running away and hiding. I also loved that Reika gets more than her fair share of the story which was brilliant since she was so mysterious until now.

My only real complaint is the forced issue of a romance that really didn't have to be part of this story. It was just a total waste of time to be perfectly honest. Kagawa draws on the same magical style employed in the creation of the Nevernever, the beloved and incredibly popular setting of The Iron Fey. Deeply rooted in fantasy mythology, and inspired by popular anime themes, Soul of the Sword is sure to captivate Julie’s core audience and new fans alike.