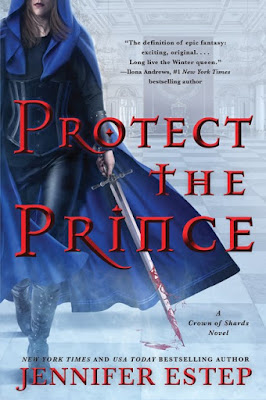 Everleigh Blair might be the new gladiator queen of Bellona, but her problems are far from over.
First, Evie has to deal with a court full of arrogant, demanding nobles, all of whom want to get their greedy hands on her crown. As if that wasn’t bad enough, an assassin tries to kill Evie in her own throne room.

Despite the dangers, Evie goes ahead with a scheduled trip to the neighboring kingdom of Andvari in order to secure a desperately needed alliance. But complicating matters is the stubborn Andvarian king, who wants to punish Evie for the deaths of his countrymen during the Seven Spire massacre.

But dark forces are at work inside the Andvarian palace, and Evie soon realizes that no one is safe. Worse, Evie’s immunity to magic starts acting in strange, unexpected ways, which makes her wonder whether she is truly strong enough to be a Winter Queen.

But Evie’s magic, life, and crown aren’t the only things in danger—so is her heart, thanks to Lucas Sullivan, the Andvarian king’s bastard son and Evie’s . . . well, Evie isn’t quite sure what Sullivan is to her.

Protect the Prince, by author Jennifer Estep, is the second installment in the authors Crown of Shards series. Gladiator meets Game of Thrones! This book has magic, murder, scheming royals, romance, and a kick-ass heroine fighting to take her rightful place as queen. Protect the Prince picks up where Kill the Queen ended. Featuring returning characters and more murder, magic, and mayhem as Everleigh Blair, Queen of Bellona, struggles with ruling a kingdom, securing alliances, and staying alive.

Even with a magical immunity, Evie isn't immortal. She can still be killed and there are those who are eager for a chance to end her reign before it even has a chance to put down its own legacy. Evie's main issue as Queen is that Nobles are vying for her to quickly marry and therefore the scheming Olympics are enjoined mercifully as the story opens. Evie has no desire to marry any time soon, especially not those who were quick to say cruel things about her when she was a little known girl who was 17th in line to become Queen.

Her first goal is to travel to Andvari and try to smooth things over after the massacre that her cousin set upon them. Although before her trip even happens, Evie is attacked by a would-be assassin, it seems that Maevan and her troops aren’t done trying to kill Evie just yet. This is the first of several attempts on Evie's life that really puts the pressure on her to understand her own magic, as well as her capability of believing she is the right person to be the Queen of Bellona.

Evie's friends from the Black Swan Gladiator Troupe who took her in when she escape being assassinated, are now her senior advisors, as well as key members of her guards. Those like Paloma, Serilda, Lady Xenia, Cho Tamato, Theroux, as well as Lucas Sullivan, the bastard prince of Andvari who is also Evie's love interest. The antagonists belong to Maevan's group called curiously enough, Bastards Brigade. They are all offspring of Mortan Royals and answer to the King of Mortan who wants to gobble up all of Bellona, Andvari, and anything else he can get his hands on.

I am eager to read the third installment in this series called Crush the King. The final part of this book really gives the reader hope that the action in the next book, may be even more intense than anything we've seen to this point. I could be facetious and say that I see a whole lot of Gin Blanco in Evie. She doesn't let anyone push her around. She stands and fights for what she believes in, and she isn't afraid of getting her hands dirty. Plus, there is always, always plenty of blood and food to go around! Oh, and by the way? This is an adult book not young adult, therefore there may be some swear words involved. Swear words don't offend me at all.