#Review - A Drop of Magic by L.R. Braden #Urban #Fantasy 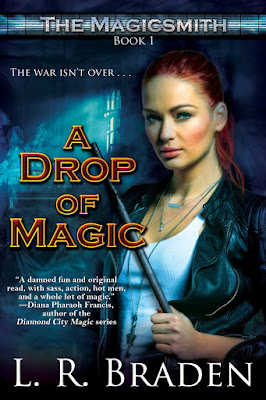 With the world clinging to a fragile peace forced on the Fae by humanity after the Faerie Wars, metalsmith Alex Blackwood is plunged into the world of the half-Fae who traffick in illegal magical artifacts. Her best friend’s murder and his cryptic last message place her in the crosshairs of a scheme to reignite the decade-old war between humans and fae.

Worse, violent attacks against her and the arrival of a fae knight on a mission force Alex to face a devastating revelation of who and what she is. To catch a killer, retrieve a dangerous artifact, and stop a war, Alex will have to accept that she’s an unregistered fae “halfer” with a unique magical talent—a talent that would change everything she believes about her past, her art, and her future.

Her world is crumbling around her, and Alex will have to decide who to trust if she and the world are going to survive.

A Drop of Magic, by debut author L.R. Braden, is the first installment in the authors The Magicsmith series. A Drop of Magic is the story about 28-year old protagonist Alyssandra (Alex) Blackwood who works as an artist specializing in metal sculptures. She lives in the mountains outside of Nederland, Colorado and shows her work at Souled Art Gallery in Boulder, Colorado where her friend James Abernathy is owner. As the story opens, Alex receives some unwelcome visitors looking for an engraved box which is supposed to be in her possession.

After chasing the two unwanted Fae out of her work place, she hopes to get some help from The Paranatural Task Force. PTF is an international agency charged with enforcing the treaty that ended the Faerie Wars, and maintaining the peace between humans and all things paranatural. Her world slowly unravels with the arrival of a Lakewood Police Detective Garcia who claims that her friend, Aiden Daye, was murdered in his home. What's worse is that Alex missed a call from Aiden the day he was murdered with a cryptic message about a gift from her grandfather.

Since Alex's father disappeared during the Faerie War, and her mother died when she was 17, Alex has no known family. To make matters worse, PTF claims that they have evidence that Aiden was involved in the trafficking of Fae artifacts. Things take an even more dangerous turn when Fae Knight Malakai (Kai) Kairn claims he's been tasked to investigate Aiden's death, as well as tossing a spotlight on the fact that Aiden was a halfer (Half-Fae/Half-Human) who wasn't registered. A huge no-no in this world.

Halfers are supposed to be registered and are sent to the nearest Fae reservation for up to a year before they are allowed to return. The deeper she digs into her friend's death, the more uncomfortable and dangerous her life becomes. Then the truth bomb explodes: Alex learns from Kai that she is descended from an important and powerful Fae line which allows her to work with metals every day without any reaction. An ability that is dangerous if anyone found out what she could do, and who she actually is. That also makes her a Halfer which if exposed, could be detrimental to the life she has.

There is a fair amount of secondary characters who show up and are counted as either Alex's friends, or people who she finds out things about the world she has been blinded to until now. Her relationships are almost as important as solving Aiden's murder and helping Kai discover who has been taking the Fae artifacts and why. From David Nolan, to James Abernathy who is destined to be Alex's romantic interest, to Marc who opens her eyes to another para group living close by, to the PTF who are really not who you think they are.

Overall, a really good start to the series. There is plenty of mystery, surprises, twists, and originality to the story that will have me coming back for more.