#Review - War of the Bastards by Andrew Shvarts #YALIT #Fantasy 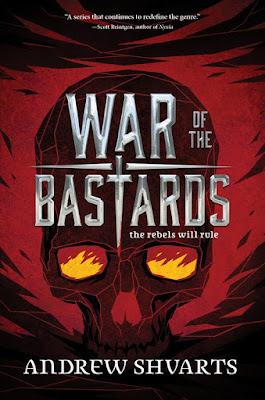 A year has passed since the fall of Lightspire. The Inquisitor Miles Hampstedt rules Noveris with a blood-soaked iron fist. Tilla and her friends have become hardened rebels in the Unbroken, a band of guerilla fighters hiding out on the fringes of the Kingdom protecting the true queen, Lyriana Volaris. Even as they fight, they know their cause is doomed--that with every passing day Miles’s army of Bloodmages spreads across the continent. But at least they have each other…and some halfway-decent drinks.


After a daring rescue mission, the group frees two vital prisoners: the Raven, a mysterious informant with a deep personal connection to Tilla, and Syan Syee, a strange girl from the Red Wastes who demonstrates an incredible new kind of magic and speaks of a secret civilization hidden in her isolated homeland. With Miles’s forces closing in, a ragtag team sets out on an eleventh-hour mission: form an alliance with Syan’s people that could turn the tide of the war. But what they discover in the Red Wastes changes everything, including their very understanding of the magic that runs through Noveris—magic that has brought the Kingdom to the brink of ruin.

The fate of Noveris hangs in the balance as Tilla and her fellow bastards fight tyranny in the epic conclusion to Andrew Shvarts Royal Bastards series. It has been a year since the destructive events of City of Bastards. After  decimating the entire royal court of Noveris, Lord Elric Kent has assumed the throne. But, the real villain of the story may be Miles Hampstedt who has risen to the role of Inquisitor and created a serum capable of making almost anyone a blood mage.

However, a group called the Unbroken has vowed to fight by any means necessary to put the rightful ruler of Noveris back where she belongs. Kent’s bastard daughter, Tilla is one of the rebel warriors as well as one of their leaders along with Galen Reza, Zell, a Zitochi warrior from the north, and the true queen, Lyriana Ellaria, and her cousin Ellarion, former Archmagus. After word that one of their spies has been captured, a rescue attempt takes place. The revelation as to who the spy will probably shock you for a minute or two. That is until you learn how far Miles has gone, then you will understand.

The group also free a girl by the name of Syan Syee who claims she is from a place called the Red Waster. She claims to dream of fire, war and ruin. She believes the world is at a tipping point and needs help in stopping Miles before it is too late. Tilla, Lyriana, Zell, Ellarion, Elric Kent, and Syan journey to the Red Wastes hoping to recruit Syan’s people to their cause. But, things don't go exactly as planned, and what the group discovers, may either help them defeat Miles, or bring the resistance to a final end.

I have read comments about Tilla's handling of things in this book and I absolutely disagree. Here's a girl who has been thrust into a war she didn't want which started with the loss of her brother, and Miles betrayal. She has been called a traitor because of who her father was, and treated badly by most people. So, she decides to humanize the people she is responsible for killing. It's a running tally she keeps throughout the book. It ends up being a whole lot which puts her in the same character of other notable fantasy heroines who did what they had to in order to survive. She does some really bad things, but she also makes a huge choice that ends up being a really good thing.

There are some really interesting relationship dynamics in this book. Although I truly hated Elric for what he's done, including ignoring Tilla when she wanted to be made a legitimate heir, there are some actual redeeming moments in this book that, yes, both shocked me, and hurt because they came a bit too late for both father and daughter to resolve their differences. I really liked Ellarion in this story.

Although he is depressed at losing his hands, he finds Syan's teaching realistic enough to understand that the future might not be so bleak after all. The relationship between Tilla Zell stills has some ups and downs, but when all is said and done, I wouldn't have changed a thing. There is one more relationship that I won't spoil since I think the only reason it was put there was to appeal to a larger audience and really not necessary in the general scheme of things.

Overall, yes, I definitely recommend that you read this series. It has remarkable worldbuilding, Tilla's sardonic, perceptive, and frankly hilarious voice makes this classic fantasy setup wonderfully refreshing and wildly entertaining. Each character in this ensemble cast is someone readers will care about right away and want to get to know better—the author is particularly skilled at drawing out the complications of their relationships. The storytelling in this world is so accessible and fun that it's sure to appeal to readers aren't avowed fantasy-lovers right alongside the buffs.