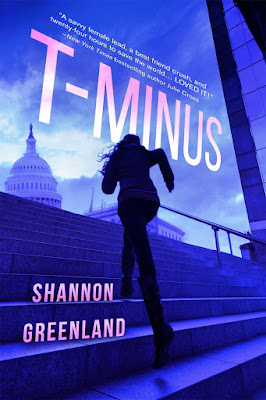 The president’s daughter has only twenty-four hours to save the country in this 24 for teens thriller.

24 hours. That’s all the domestic terrorist cell has given Sophie to stop the assassination of the president of the United States—her mother—and to save the country. But with her father and brother missing, too, she knows this goes deeper than anyone thinks. Only someone on the inside would know how to make the entire First Family disappear.

It’s up to Sophie and the few friends she trusts to uncover the conspiracy and stop the terrorists—because they want something from her, she has no idea what it is, and they’ll kill her brother if she goes to anyone else…

Shannon Greenland's T-Minus is being sold as 24 for teens. Pretty good description. This espionage thriller sets a tight ticking clock and high personal stakes that will keep readers turning pages until the end. 17-year old Sophie Washington's mother is the first female President of the USA. One night, there is a legitimate threat against her mother which protocol dictates that the Secret Service separate all four members of Sophie's family to secure locations. Her father leaves her with a curious message, "Do Not Trust Anyone." Anyone could be a threat.

Over the course of the next 24 + hours, Sophie's life will turn into a nightmare and secrets will be revealed that will upturn her life. Sophie and her friends Jackson, Callie, and Zeke are all members of the CIA's teen program. (There is no such program. It's a figment of the author's imagination). They attend a school that trains them in all areas of covert missions including hand-to-hand, martial arts, simulations, and obstacle courses.

While trying to discover what happened to her brother Erik, and attempting to save her family, Sophie discovers the truth about an incident that happened 15 years ago but was covered up by the people she knows very well including the Vice President. As for Sophie's character, there were times that I questioned the thought process to some of her choices and decisions. I felt as though there were certain instances that were unrealistic and problematic. But, it is fair to say her choices in the end were courageous and heroic.

Recommendation: If you can honestly and truly suspended all reality for the entire time you read this book, you should enjoy the action packed scenes and the daring escapes that Sophie manages while staying alive and attempting to uncover who the terrorists are. If you are a fan of shows like 24, or even Designated Survivor, you might actually enjoy this story since you already know that fiction is not real life and it is pretty much impossible for what happens in this book to actually take place.