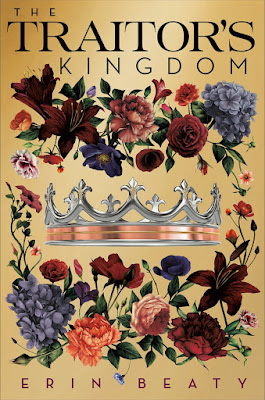 The fate of Sage Fowler and her fiancé Captain Alex Quinn is decided in the epic conclusion of the Traitor’s Trilogy.

Once a spy and counselor to the throne, Sage Fowler has secured victory for her kingdom at a terrible cost. Now an ambassador representing Demora, Sage faces her greatest challenge to avoid a war with a rival nation.

After an assassination attempt destroys the possibility of peace, Sage and her fiancé, Major Alex Quinn, make a dangerous gamble to reveal the culprit. But the stakes are higher than ever, and in the game of traitors, betrayal is the only certainty.

Unlikely alliances are forged and loyalties are stretched to the breaking point in the stunning conclusion to the Traitor’s Trilogy.

The Traitor's Kingdom is the third and final installment in author Erin Beaty's Traitor Trilogy. As the story unfolds, Sage Fowler has taken up her new job as ambassador to Casmun while her fiancé, Major Alex Quinn, has taken charge of the Norsari. Thanks to the fact that Alex is unable to marry until he turns 24, things aren't exactly perfect between the couple who are separated by great distances. But, to be fair, that has been the story between these two since the beginning when they first met and she understood his responsibilities to the country and his King.

To make things interesting, Princess Alaniah (Lani) from Casmun, who Sage met in the previous installment, is making an early visit. She's the highest ranking Casmuni to visit Demora in 200 years. She's supposed to choose who among the Demora royals are worthy of being chosen to travel to her country. Sage is still suffering from what happened to her in the previous novel and the acts she took that ended up stopping a way, but lead to mass casualties.

Sage and Lady Clare are summoned to the Capitol where Sage learns that she is to be appointed ambassador for a peace talks between Demora and Kimisara. Things have changed in the land of Kimisara since the last installment. After a devastating loss at the hands of Sage and Alex, peace has become desirable. Demora and Kimisara have been at war for many generations, but with a new Regent in charge, and the old King dead, she is more amenable to peace talks. Especially to save her only son who will one day become King.

This leads Sage and Lani meeting with Queen Zoraya of Kimisara and several attempts at disrupting the peace talks. Sage is usually adept and a studious observer of the people around her which has been her strength when confronting challenges. But, she couldn't figure out who was responsible for attempting to sabotage the peace talks and made some interesting blunders. She also had to deal with Clare who really wasn't likable for most of this story. I have given Clare a sort of pass because of her own tragic loss, but that doesn't mean that I didn't cringe whenever she took Sage to task for minor indiscretions.

Alex wants to prove himself. As the son of a General, he has been given every opportunity to prove that nepotism isn't a factor in any of his choices or the promotions that he's received. When the law changes to allow him to marry Sage, he falters a bit, and really comes out and says he can't marry because people will think it was because of him that the law was changed. Plus, as the man in charge of the Norsari, he has responsibilities to see that his men are properly trained and can handle any situation that arises. No worries my fury friends, all is well that ends well in Sage and Alex's world.

There is a third character who plays a part in this story. His name is Captain Malkin Huzar and he is from Kimisara. If you've read the previous installment, you know that he and Sage have a sort of interesting relationship. He is also connected to the Queen of Kimisara and is very protective of her and her son the future King of the country. Huzar and Alex make for some interesting allies along the way, and he absolutely knows that Sage isn't someone to be taken lightly.

“We each play several roles in life – that doesn’t make them all lies.”

In closing the final chapter on Sage & Alex, she's evolved from being a highly intelligent girl who was living with her aunt and uncle and refused to marry, to a matchmaker’s assistant/spy, to ambassador representing Demora. She’s traveled far from home, fallen in love, and sacrificed much for her kingdom. She wears the scars of her journey, she suffers from nightmares, and she might be the gleaming star in the sky that readers are looking for. The final wrap up was pretty curious as well. Lani, Sage, Alex, and Clare have all been given roads to some interesting futures. I wouldn't say no to a future installment featuring one of the other characters.