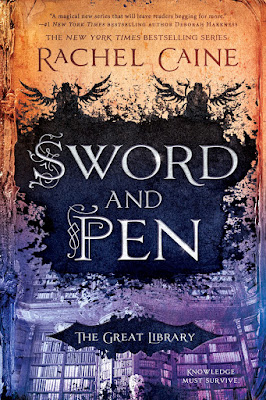 With the future of the Great Library in doubt, the unforgettable characters from Ink and Bone must decide if it’s worth saving in this thrilling adventure in the New York Times bestselling series.

The corrupt leadership of the Great Library has fallen. But with the Archivist plotting his return to power, and the Library under siege from outside empires and kingdoms, its future is uncertain. Jess Brightwell and his friends must come together as never before, to forge a new future for the Great Library…or see everything it stood for crumble.

Sword and Pen is the Fifth and final installment in author Rachel Caine's The Great Library series. As a sort of summary, The Great Library of Alexandria exists in a alternative world. It exists to "contain the knowledge of the world in the name of the greater good." This is a world where possessing real honest to goodness books is a serious crime, but there are those who have found a way to do so even at the threat of death by the Great Library.

This final story revolves around every possible character that readers have come to know from the first book forward. Jess Brightwell, Khalia Seif, Christopher Wolfe, Dario Santiago, Thomas Schreiber, Morgan Hault, Captain Nic Santi, and Glain Wather. Also, don't ignore the between chapters that provide some clues as to what is happening and what has happened to get us to this point in the series. The story picks up right where Smoke and Iron left off so don't forget to read that book before jumping into this one.

The Archivist is on the run and he has a bunch of followers standing alongside him preventing the Great Library from moving forward without him. If he falls, he plans on doing as much damage as possible. If that weren't enough, navies from several prominent nations, including Spain, Japan, and Russia, refuse to leave until a new agreement is made between the new Archivist and signor nations which really only want to get their hands on the wealth of knowledge that Great Library possesses.

This is a book that switches narratives between the above named characters regularly. For me, the one I felt for the most, and have from the very beginning, is Jess. Jess grew up running illegal books to those who can afford the luxury of owning original books, and is also spare heir to the Brightwell empire. Jess joins with Christopher & Dario hunting the deposed Archivist, the so called Pharaoh of Alexandria and really ends up suffering more than any other character in this book.

I have said this before, I shall say it again, every other character in this book has gotten exactly what they wanted throughout this series, except Jess. Jess is also the one character who doesn't really have any goals for his life. Jess never imagined getting this far so any day that he is still alive, is a blessing in disguise. Khalia, by design, or by accident, has become the one who gets everything she wants and more.

That's really all I'm going to say about things that happen to her. That could be said for Thomas as well. Thomas is brilliant. He doesn't need the library. He's proven that time and time again that if you leave him alone, he will find a way to come up with something brilliant, or save the day when the odds are stacked against him and the others. Hell, even the Archivist knows that Thomas is brilliant and therefore will do anything to get his hands on Thomas for his own nefarious plans.

Morgan's story has always been the most curious. She may be the most powerful character in this story, but her life is anything but perfect. Her story could be considered to be both tragic and expected, but in the end, she's far more interesting than you can imagine. Her feelings for Jess haven't changed all that much, but there isn't much of a path to success with everything they've been through. Will they end up together?

You could also ask the same question of Dario and Khalia who have been lovey dopey for the past several books. They are fated to be together even though they come from different socioeconomic backgrounds. Probably the most interesting and curious character is Scholar Christopher Wolfe who has been through hell and back but never lost his love for Captain Nic Santi.

Wolfe getting grey hairs because his kids are irresponsible about their health was pretty fun to read about. Calling Jess his son in front of Jess's father was bloody brilliant, and I adored the fact that Jess's mother didn't deny the accusation. I think that this was the perfect time to end the series and not try to drag it on further. The author got what she wanted from her characters, and there's really not much more she could do with them except allow one to die, which I am grateful she avoided that pitfall.