#Review - Realm of Knights by Jennifer Anne Davis #YA #Fantasy 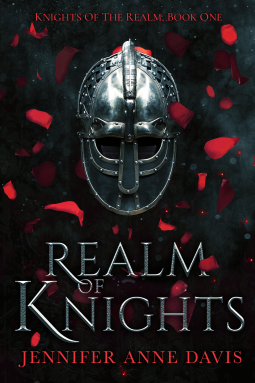 Reid has spent her whole life pretending to be a man so she can inherit her father’s estate, but when a chance encounter threatens to expose her lie, she is forced to risk everything.

In the kingdom of Marsden, women are subservient to men and land can only pass from father to son. So when Reid Ellington is born, the fifth daughter to one of the wealthiest landholders in the kingdom, it’s announced that Reid is a boy.

Eighteen years later, Reid struggles to conceal the fact she’s actually a young woman. Every day, her secret becomes harder to keep. When one of Marsden’s princes sees her sparring with a sword, she is forced to accept his offer and lead her father’s soldiers to the border. Along the way, she discovers a covert organization within the army known as the Knights of the Realm. If Reid wants to save her family from being arrested for treason and robbed of their inheritance, she will have to join the Knights and become a weapon for the crown.

To protect her family, Reid must fight like a man. To do that, she’ll need the courage of a woman.

Realm of Knights is the first installment in author Jennifer Anne Davis' Knights of the Realm series. 18-year old Reid Ellington lives in the land of Marsden where women have no rights, nor can they inherit land from their fathers. They are basically cannon fodder for political reasons. Reid is the youngest daughter of 5 who has to play the part of a man until one of her married sisters has a son. Reid has spent 18 years hiding the fact that she was born female so that Duke Ellington's land stays in the family.

In Marsden, lying about your identity is punishable by death. What's worse is that Reid is getting to that age where it’s obvious that she is not a boy, even by those who grew up with her. Trouble soon arrives in the form of Prince Gordon and Prince Ackley who demand that the Duke provide them with 500 soldiers to protect the border from incursions. They realize almost immediately that Reid is a girl, but instead of exposing her and charging her father with treason, they ask her to serve the realm and in doing so, she can earn a pardon for her father for lying to the king.

As a female who was trained in combat, the young princes believe her to be the perfect person to spy on the neighboring nation since she can "pass" as both male and female. Reid, in trying to do what's right and prove herself the pardon for her father, ends up involved in a family squabble. Ackley claims that his Uncle Henrick, who rules over Axian, is after the Marsden crown which his brother Eldon currently holds. After passing several challenges put forth for Reid to join the exclusive Realm of Knights, she finds yet more trouble. King Eldon, not knowing that Reid is a member of Ackley's Realm of Knights, is sent to Axian to steal something that is supposed to hold a life changing secret.

Thanks in part to Princess Idina and some blackmail, comes out in public as Lady Reid Ellington. She gets to experience what life as a woman in Marsden and Axian really means. Reid finds that Axian is a place where she should be living, not Marsden where women have no rights and no freedoms. In Axian, Reid meets the so called enemies who are not what they seem. Axian isn't a country preparing for war. Axian is a country that appears to be thriving. In fact, almost all of the family seems rather friendly to Reid except for one. Are they for real? Or, are they playing a game Reid as a pawn in a deadly game?

I liked Reid just fine. I would have liked the author to show more of her skills as someone who was trained in combat, but it's early in the series, right? I totally blame her situation on the fact that her father refused to remarry after his wife died thus leaving Reid to shoulder all the responsibility of being her fathers heir. In reality, I do believe that he loves his daughter unconditionally as is shown later in the story. There's so many things that need to be uncovered.

I would have liked a wee bit more world building in order to suss out this world. Is Ackley really who he pretends to be, and not just another hurdle for Reid to jump over?  The question really is, who is the true antagonist, and who is not what they seem? If Ackley actually cared about Reid as he claims, why then stand silent when she is ordered to do the King's bidding? Not sure if I am all in on the suspected romance between Reid and Gordon.

However, yes, I will continue with this series since I trust this author and the stories that she writes. I loved her Reign of Secrets series, but need to finish reading the final (2) installments in the series.