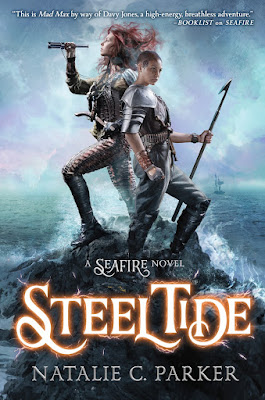 
The second book in a heart-stopping trilogy that follows the captain of an all-female ship intent on taking down a vicious warlord’s powerful fleet.

Caledonia may have lost her crew, but she’s not done fighting yet. After nearly dying at the hand of a powerful foe, Caledonia is pulled from the sea and nursed back to health by a crew of former Bullets that call themselves Blades. The Blades escaped Aric Athair’s clutches and now live a nomadic existence, ready to disappear at a moment’s notice should trouble come their way.

But Caledonia wants to do more than just hide. She wants to find the Mors Navis and her beloved sisters. She wants to continue fighting Aric’s fleet and to take back the Bullet seas. She’ll need to do everything in her power to convince the Blades that fighting is their only option, that there has to be a life better than the one under Aric Athair’s reign, and that finding the women of the Mors Navis is the first step to revolution.

Steel Tide is the second installment in author Natalie C. Parker's Seafire trilogy. Steel Tide opens almost immediately where Seafire ended. Caledonia Styx threw herself overboard after being impaled on a Bullet Ship’s spire by Fiveson Lir who has been playing a long game against Caledonia for years. Caledonia is helped back to health by former Bullets, now known as Blades. They claim to have escaped from Aric's hold somehow and they now live in a small community, mostly keeping to themselves.

The Blades, led by Sledge, Pine, and Triple, nurses her back to health. Separated from her sisters who probably think she's dead, Caledonia must win over a new band of characters and reunite with her crew who should have headed for freedom via the net. After allying herself with the Blades, Caledonia decides to take the Collection ship from Aric Athair. What she learns is stunning. One, Lir is still after Caledonia and doesn't believe she died. The second is even worse. Her ship and sisters have been captured and taken to the dreaded Slipmark where Bullet's are made and addicted to drugs.

Caledonia makes a deal with the Pine, Triple & Sledge. They help her get her crew back and she'll help them get through the net to safety. After several close calls and some eye wide open surprises concerning a character known as Steelhand (No, I will not tell you who this person is!), Caledonia, with some help from tertiary characters as well as Nettie, are reunited with her sisters. There is some real hurt feelings towards Caledonia. But, before they can feel like they've won and can leave the net as planned, Caledonia makes another decision that leads her to make a huge stand along with her sisters and her new Blade friends.

She will have to make a choice; pick up and run, or stand and fight with some really interesting new toys. (No spoilers!) Caledonia finally has to face the man who rules this world; Aric Athair, but Lir is not too far behind. There is so much going on in this book that it is hard to stay focused on not revealing everything that happens. Caledonia becomes a new character. One much stronger, and more determined to lead her allies to a better life and future without the Bullets, especially Lir.  The ending is truly stunning. So much so that I am eager to see where the author sends Caledonia and her allies when all is said and done.