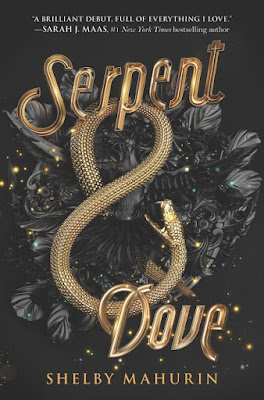 Bound as one, to love, honor, or burn. Book one of a stunning fantasy duology, this tale of witchcraft and forbidden love is perfect for fans of Kendare Blake and Sara Holland.

Two years ago, Louise le Blanc fled her coven and took shelter in the city of Cesarine, forsaking all magic and living off whatever she could steal. There, witches like Lou are hunted. They are feared. And they are burned.

As a huntsman of the Church, Reid Diggory has lived his life by one principle: Thou shalt not suffer a witch to live. But when Lou pulls a wicked stunt, the two are forced into an impossible situation—marriage. Lou, unable to ignore her growing feelings, yet powerless to change what she is, must make a choice. And love makes fools of us all.

Set in a world of powerful women, dark magic, and off-the-charts romance, book one of this stunning fantasy duology will leave readers burning for more.

Serpent and Dove is the first part of a two part duology by author Shelby Mahurin. The story is set in a kingdom called Belterra, which is essentially a fantasy version of historical France. Witches are being hunted by Chasseurs, a special brand of police enforcement sworn to the Church who dedicate their lives to hunting witches. Two years ago, Louise "Lou" Le Blanc, a Dames Blanches, fled her life of witchery to not only save lives, but to hide from her own coven. She ended up in Cesarine where she becomes a thief along with her best friend Cosette (Coco).

After an extremely public and compromising incident, Louise finds herself in the most constricting of all unions: marriage to a Chasseur. Reid Diggory is a Chasseur, a witch-hunter. He swore an oath that, above all, he will not allow a witch to live. This life is all he has known since the Archbishop took him in as a child and he excels at it. He's quickly made his way to the top as Captain and not even his first love will stand in between him an his true purpose. Reid sees the world in black and white, good and evil, witches and the rest of the mortals, even though the rumor is that everyone once lived in harmony.

Reid has no clue that the woman he is forced to marry is also his enemy. For a witch who renounced magic, Lou finds herself entangled with an awful lot of magic time and time again. Deeply rooted in French folklore and the witch trials of the seventeenth century, the characters and setting of the story build a rich, exquisitely detailed world steeped in historical atmosphere and bolstered by elements of magic and intrigue. This book follows the impossible romance between these two and all the consequences that follow it.

The city of Cesarine may be guarded by its huntsmen, but the true power of this story lies with the women: powerful bonds of sisterhood and covens, sacred magic, and feminine strength build a world where men may appear to have control, but where women truly reign. Lou takes girl power to a new level with her fiery wit and fierce independence.

Whether she’s conning the village baker out of cinnamon rolls or embarrassing Reid with a rendition of the local pub song, Lou’s unbridled spirit makes her a perfect example of a strong female protagonist. Reid and Lou’s slow burn romance is full of tension, humor, and playfulness. Lou’s irreverent attitude pairs with Reid’s honorable upbringing for a chemistry hotter than the flames of a stake.