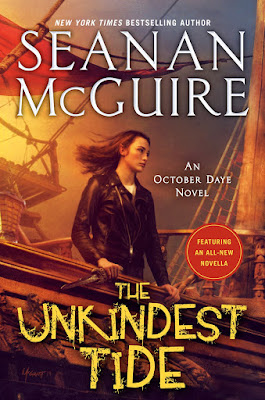 Hundreds of years ago, the Selkies made a deal with the sea witch: they would have the sea for as long as she allowed it, and when the time came, she would call in all their debts at once. Many people assumed that day would never come. Those people were wrong.

When the Luidaeg—October “Toby” Daye’s oldest and most dangerous ally—tells her the time has come for the Selkies to fulfill their side of the bargain, and that Toby must be a part of the process, Toby can’t refuse. Literally. The Selkies aren’t the only ones in debt to the Luidaeg, and Toby has to pay what she owes like anyone else. They will travel to the fabled Duchy of Ships and call a convocation of the Selkies, telling them to come and meet the Luidaeg’s price…or face the consequences.

Of course, nothing is that simple. When Dianda Lorden’s brother appears to arrest Dianda for treason against the Undersea, when a Selkie woman is stripped of her skin and then murdered, when everything is falling apart, that’s when Toby will have to answer the real question of the hour.

The Unkindest Tide, by author Seanan McGuire, is the Thirteenth installment in the October Daye series. Toby Day, Knight Errant, Private Investigator, Hero to the Realm, receives an unwelcome guest, Luidaeg. Luidaeg, the Eldest of Maeve's offspring, Sea Witch, and Toby's friend and adversary, calls on Toby to answer a call of duty for which she owes Luidaeg. In a matter of weeks, Luidaeg must deal with the Selkies who she made an ultimatum to hundreds of years ago after the Roane all but disappeared from the world.

Hundreds of years ago, Luidaeg's nameless sister urged the slaughter of the Roane. The Roane can see paths to the future. They saw Toby, who has blood magic, come to turn back the tide. 3 years ago, Luidaeg told Selkie clan leader Elizabeth Ryan, (who is also helping Toby's wayward daughter Gillian learn how to be a Selkie), that a price must be paid. Toby, along with Tybalt, Quentin and several others, travel to the Duchy of the Sea where every Selkie in the world is expected to heed the call by the Sea Witch.

A Convocation will take place during which every Selkie will have to make a choice. There are debts that need to be settled. As Gillian is the weakest of the Selkies, this puts a target on her back. Gillian was recently turned Selkie by Luidaeg to save her life after she was targeted again because of whose daughter she is. Let's be honest here folks, if Gillian never again graced the pages of this series, I would be forever grateful. She brings nothing but angst and hatred towards Toby. If you've read the series from the start, you know why. Some of the hatred is directed towards Faerie which is understandable. But, woman up and get over yourself!

The Duchy of the Sea is home to another firstborn named Amphitrite, who also goes by Captain Pete. Amphitrite is firstborn daughter of Titania and Oberon, mother of the Merrow who has, of course, heard about Toby and her exploits. The Merrow believe she is dead thanks to the fact that most firstborns have all but disappeared from the world. All but Luidaeg and Toby's mother that is. Some of the funniest moments in the story happen when Dean Lorden, Count of Goldengreen, and his family discover that their maker is alive and well.

But, that's not all there is to this story or it would be rather short. Dianda Lorden's brother appears to arrest Dianda for treason against the Undersea. Toby gets to take a quick jaunt underwater to play the role of hero, and for once, nothing goes terribly wrong. The problems are all on land. After a Selkie clan leader woman is stripped of her skin and then murdered, Toby has to find out who is responsible. Can she save Dianda's Seamist, while also discovering the person responsible for killing a Selkie?

By the way, there is a novella at the end of book that features Raj, who is the Prince of Cats. Read it or not. If you read it, you will most likely like it.