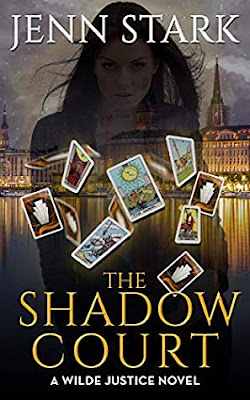 Don’t you forget about me…

She’s a Tarot-reading artifact hunter finally willing to own her supernatural abilities. He’s the all-powerful Magician of the Arcana Council who once loved her…but now doesn’t remember her, the result of a battle to defeat a terrifying enemy.

Isolated and alone, Sara must race time to help the Magician uncover his ancient knowledge, but can she live with what she finds? Will his dark past destroy them both?

Worse, a rival council, known only as the Shadow Court, has emerged to wage battle against the Arcana Council. And if Sara can’t help the Magician recall how to combat this insidious, mind-bending threat, the world will descend into devastating war.

Love could be your last, best weapon when you confront The Shadow Court.

Jenn Stark's The Shadow Court, is the Fourth installment in the authors Wilde Justice series. One should have some familiarity of The Hallowed Knight before jumping into this book since everything is connected. Well, almost everything. Tarot Card reading/artifact hunter/Justice of the Arcana Council Sara Wilde is the first Justice in two hundred years. She is tasked with taking out the most dangerous magic-wielding criminals on the planet. But, this mission might be her most dangerous yet.

Sara is on a desperate mission to find answers as to why the Magician lost all of his memories of Sara. Sara's journey takes her from French Guiana (Devil's Island) where she has to face her own Indiana Jones like adventure, to Paris, France where she discovers that she is being followed, to Barcelona, Spain, London, UK, and Hamburg, Germany before ending in Vegas. On top of everything that is happening with searching for answers to help Armaeus, Sara encounters difficult challenges where ever she goes. It seems that someone has been keeping secrets.

Secrets about The Shadow Court and the fact that they are at war with the Arcana Council and could be the one thing to bring the entire stack of cards down in one fell swoop. Some secrets go back as far as the previous incarnation of Justice of the Arcana Council. Sara feels as though she is being herded by mysterious and invisible forces which is bad since she doesn't have any real back-up. Especially from Armaeus. Oh sure, she has Nikki, Death, Kreios, and Simon along for the ride, but they can do only so much. Plus, every time someone wants to stop Sara, all they have to do is go after Nikki.

I liked the fact that Sara went back to her roots, as it were. She was a brilliant artifact hunter before giving all of her money to protect the most innocent Connecteds; the children. She was pushed into working for Armaeus finding dangerous artifacts before she ascended to the Council. She still is learning her job and her abilities but manages to save the world one step at a time. Sometimes I wonder if someone is finally going to give her a manual of sorts to help her discover what she is really capable of. Then I shake my head and say, what's the point after 14 books? Let her figure her own conundrums out while we enjoy the ride.

My heart broke for Sara in this book. Truth be told, I have no clue how she is able to do what she does without melting into the background and saying Go To Hell You Bloody Sods! She puts her life on the line literally every time she takes a job. Whenever there is a cry for help, Sara rushes in without any thoughts to her own welfare. Villains pop up out of the woodwork frequently with desires of removing Sara from the equation. I think we are finally getting to the point where Sara's abilities have far outmatched what she believes she is capable of. The question needs to be asked if she is really the most powerful person in the world, if not, who could match what she's shown she's capable of doing?

Stark has a brilliant ability to pack a story filled with action, suspense, twists and turns, surprises, as well as some romance kicked in. However, this book is light on romance and heavy with hi-octane action and adventure. I am absolutely OK with that. This book isn't self contained. There are way too many questions that need to be answered. So, I definitely am eager to read the next installment to see what happens next.