This week marks the release of Unearthed the first novel in Cecy Robson's new Death Seeker Urban Fantasy series featuring fae,the death, and other supernatural creatures. Come check out the book, enter to win a fun giveaway and order your copy of Unearthed! 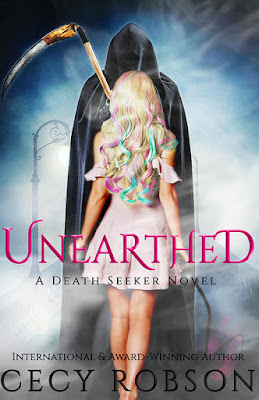 Fae was once a flourishing paradise. Until Death turned greedy and destroyed it, targeting the creatures who inhabited it. Those who survived escaped to Earth’s realm, but Death wasn’t far behind . . .

Olivia Finn is just another pixie trying to blend in among humans and hide from the death hounds who devoured her family. Clinging to the talisman that keeps her veiled from those who hunt her, she believes she is safe. . .. Until Death finds her and discovers she’s immune to its grip.

Now that Olivia’s power is unearthed, she is sought by Fae who see her as their savior and stalked by dark entities compelled to destroy her. Can she trust the King of the Dead who has sworn to train and protect her? Or should she obey her instincts that warn he desires more?

Olivia can no longer hide from Death. To survive, she must seek it.

Unearthed is the first installment in author Cecy Robson's Death Seeker series. 26-year old Olivia Finn is a pixie who wears a talisman to hide from Death. There are others like her as well, including some who work in her office. A Cù-sìth Death hound named Cathasach has been searching for Olivia and others like her. He convinced other forms of Death to feed on living souls. Olivia has escaped him several times before, and she has become his obsession since devouring Olivia's family when they escaped to Earth.

Olivia works as a paralegal, administrative assistant for MacGregor & Santonelli law firm. Olivia is clever at multitasking able to keep her boss from blowing a circuit. Olivia finds herself working for a high profile criminal defense attorney named Scott Ryker. Ryker has an unusual secret which is spoiled by the cover of this book. Living with her best friend Dahlia, lying low, and trying not to do anything to get noticed goes flying out the window when Cathasach and Gremlins attack at a bar that she and Dahlia are enjoying.

Things quickly spiral out of control when the Grim Reaper himself seems to step out of darkness to help save Olivia. But, it appears that Olivia is far from being helpless. Olivia discovers that she has new powers that can help her fight the hell hounds that are after her people. Enter Ryker, the dark brooding Grim Reaper who offers to help train Olivia in order to fight Cathasach and help her friends survive being devoured. In return he want’s her to end his life. He’s been the Ankou, aka King of the Dead, far longer then was meant to be and the long life has taken it’s toll on him.

I think it's fair to say that Cecy has a reputation for hot hunky male characters who fall for women who may be the key to survival for all Fae races but have no clue as to what they are doing. This is a story that is both humorous at times, and action packed. There are so many similarities to other series I dare not spoil them for you. Olivia is shoved into the spotlight as being some sort of miracle worker even though she has no clue how her powers work, or why everyone is not looking for her to save the day.

But she had this annoying propensity for fainting/blacking out when things got rough. Twice she did that at the height of a battle. Perhaps in this instance, third person narrative would have been preferred. There are some really interesting characters as well. Bill, her boss, is a gargoyle who is the de-facto fae leader. Jane is a cross between a Druid and a Hydra who knew almost right away that Olivia was immune to Death. There are even dragons. The villains are dark, and evil, and nourish themselves by feeding on souls.

I may have only given this book 3 1/2 stars, but most of that negativity comes from the office politics where women suddenly have claws whenever someone looks at them wrong, or if they intrude on someone's else's man.


…in the Glen a nightclub where the Fae like to gather

Lights flash and magical mist pours across the dance floor, allowing privacy to those desperate for touch. Fae aren’t plentiful, and neither are establishments for us to gather. That’s what makes the Glen fun. It doesn’t just bring my kind together, it frees us. No glamour, no pretending. We discuss magic and the old realm, curse Death for destroying it and celebrate our survival.

With a shimmy and a shake, lavender and silver wings sprout from Dahlia’s back. She stretches, relishing the feel of simply being herself. She winks at me, her glimmering lavender eyes and lips radiant.

A drunk mountain troll stumbles between us. She releases my hand, allowing him through before clasping my hand and guiding us through the gyrating swarm of bodies. “Let’s have a drink, darling.”

I squeeze her hand. Fae are affectionate beings. In the human world, we cage our need to caress, embrace, and make love. It’s a way to keep our identities secret and another way to prevent Death from finding us.

Bill’s broken glamour was a result of a stolen kiss. It revealed his form to a human and worst of all damaged his talisman. Our talismans remain the only way to hide from those who hunt us. Without them, it’s a death warrant with our executioners often seconds from being collected.

A banshee sprints away from the bar and through the swarm of Fae. With all the grace of a swan, she leaps into the air and straddles the male who entered behind us. “David!” she screeches. “Sorry,” she adds when we groan and cover our ears.
"David” loses his tiny accountant persona, morphing into a giant cyclops with a long blond Mohawk. He laughs, catching the banshee when her legs break free of his widening waist.

She screeches. Again. The thought of that voice in the throes of passion makes me cringe. “David is going to need serious earplugs to get through the night,” I mutter.

Dahlia giggles, her laughter like wind chimes in the soft breeze. “Perhaps. But it will be worth it, darling,” she sings. 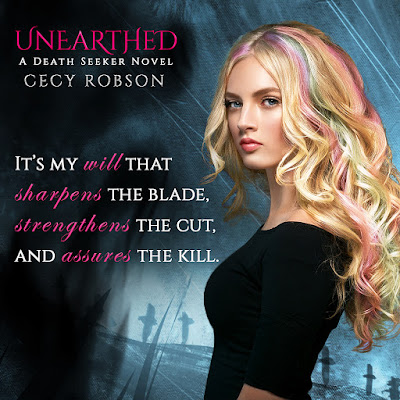 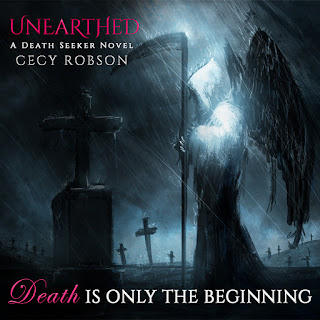 CECY ROBSON is an international and multi-award-winning author of over twenty-five character driven novels. A registered nurse of eighteen years, Cecy spends her free time creating magical worlds, heart-stopping romance, and young adult adventure. After receiving two RITA® nominations, the Maggie Award, the Award of Excellence, and a National Reader’s Choice Award nomination, you can still find Cecy laughing, crying, and cheering on her characters as she pens her next story.


Cecy Robson will give one lucky winner a $50.00 US Amazon Gift Card.
a Rafflecopter giveaway 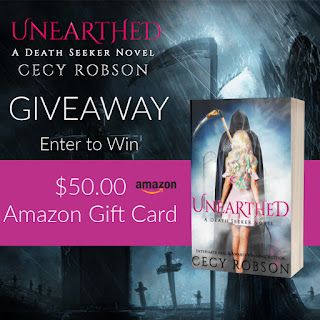