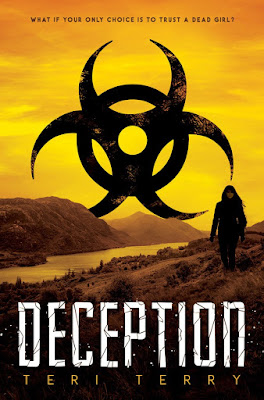 
The second book in the spine-tingling Dark Matter trilogy. Finding the cause of a deadly epidemic and a cure has never been more urgent—or uncertain.

Shay, one of the rare survivors of the epidemic sweeping the UK, has surrendered herself to the Army because she believes she’s a carrier of the deadly disease. Along with other survivors, she unwillingly becomes a test subject in an effort to find a cure. When the lab where she’s being held is attacked, Shay and a few others escape—with the help of Dr. Alex Cross, Kai’s hated stepfather and Callie’s father. Alex is the leader of the cult-like group Multiverse. Their agenda is murky, but genetic engineering might be one of their goals.

Meanwhile, a heartbroken Kai is determined to find Shay. He’s discovered survivors aren’t carriers, and Shay sacrificed herself for nothing. Teaming up with other survivors who are being hunted, Kai races to rescue Shay before it’s too late. His sister, Callie, the true carrier of the epidemic, continues to hide her secret, and a wave of infection follows in her wake as she travels across the country.

As mysteries deepen, the teens must decide whom to trust, and their friendships are tested. Is Callie who she says she is? Should Shay trust the man her mother ran away from—a man Kai hates? Will Kai ever forgive Shay for her betrayal?

Series Overview: A secret scientific experiment goes fatally wrong, and it’s up to three teens to put the pieces of this medical mystery together in hopes of stopping an epic human extinction.

Deception is the second installment in author Teri Terry's Dark Matter trilogy. This story is about a devastating plague that was unleashed on Scotland and other parts of the UK after some scientists decided to play around with particle accelerators, quantum particles, and dark matter in order to create a biological weapon. The trilogy revolves around (3) characters. Callie is a young girl who was apparently kidnapped, experimented on, treated and killed, only to end up as a ghost.

Callie is still on a mission to find the doctor she is calling Doctor # 1. He was responsible for what happened at a secretive lab in Scotland. He was the one who treated then burned her body after she was supposedly cured. Callie can only be seen or heard by other survivors. Callie has finally come to terms that Shay isn't responsible for the spreading of the wave of death that seems to have followed Callie everywhere. There is a whopper of a surprise in story for readers once you reach the ending in regards to Callie.

Sharona aka Shay McAllister, is a teen who came down with the plague but survived. Only about 5 % of the population are immune to the plague itself. She thought she was a carrier of the dreaded plague and turned herself in at the end of Contagion. Shay developed the rare ability to tell if someone is lying, she can also heal herself, and force people into listening to her. Shay finds allies including a doctor who just happens to be her father, as well as Callie's. Coincidence? I don't think so. People like Shay are being killed on sight since everyone believes they are carriers. In the end, Shay makes an interesting choice to follow her apparent father in seeking answers as to what really happened, and if there is any way to stop it from spreading beyond the UK.

Kai Tanzer is Callie's older brother, but can't see or hear her like Shay can. He's really upset at Shay for taking the blame for spreading the plague. Kai is also reluctant to trust others. He has witnessed atrocities by group called SAR (Special Alternatives Regimen). Kai as someone who is immune, is required to have a tattoo identifying them as being immune to the virus. They can pretty much go anywhere without any issues. Kai has a whole lot of communication with Shay's best friend Iona in this book and that gives readers a chance to sift thru the lies from the truth as Iona is really seeing it from a different perspective.

We meet a whole bunch of new characters, some of them are a bit shady and some immediately grow on you like Freya. One of the positives of this trilogy is the short chapters which I believe is a good thing for reluctant readers who are not sure they want to read this series. There are some interesting twists that are revealed at the end of this book. It is obviously a ploy to get readers interested in reading the finale. Also, I am not sure what the future holds for Shay and Kai, but it almost felt as though the author was trying to disrupt any future plans by inserting a new character for Kai to yearn for. One of the things really gets to me is Callie. And, no, I am not going to spoil it for you. Let's just say that her overall storyline is a head scratcher.